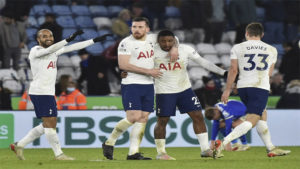 Manchester United’s second-half turnaround was quite the surprise, too.

On a dramatic night in England’s top flight, Tottenham were losing to Leicester after 94 minutes and 52 seconds. Within two minutes, Steven Bergwijn had scored two goals to seal a 3-2 win pretty much out of nowhere.

As an extra reward for Tottenham, the victory took the team above fierce rival Arsenal and into fifth place in the league — only one point off the Champions League positions with games in hand.

“My team showed they don’t want to give up and until the end we have to fight,” said Tottenham manager Antonio Conte, whose unbeaten league record at the London club was preserved.

The previous latest comeback came in arguably the Premier League’s most famous game, when Manchester City scored in the 92nd and 94th minutes to beat Queens Park Rangers 3-2 and clinch the title in May 2012.

As for Manchester United, Ralf Rangnick’s under-pressure team put in a wretched first-half display at Brentford and was lucky to be 0-0 at halftime, only for Anthony Elanga — with his first Premier League goal — Mason Greenwood and Marcus Rashford to score after the break in a 3-1 win. Ivan Toney pulled a late goal back for Brentford.