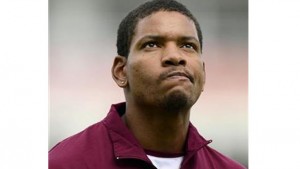 IN normal circumstances, Kieran Powell might have been with the West Indies World Cup team in Australia and New Zealand, as he had been on the tour of New Zealand just over a year earlier.

Applied to West Indies cricket, normal is not an adjective that immediately springs to mind.

An ocean away, the tall, elegant left-handed opener from Nevis, at 26 in the prime of a sportsman’s life, was in Sri Lanka, turning out for the Tamil Union Cricket and Athletic Club in the Premier League.

According to his father, Carlisle Powell, a former West Indies Cricket Board (WICB) director, it is an arrangement developed out of his friendship with the legendary Sri Lankan spinner Muttiah Muralitheran, the Tamil Union’s most illustrious player, and brokered by his manager Emma Everett, who also represents his former teammates Dwayne Bravo and Denesh Ramdin and Sir Richie Richardson, now West Indies team manager.

Following the first Test against New Zealand in Kingston last June, Powell advised Richardson and then head coach Ottis Gibson that he needed to take a break from international cricket “to deal with a personal issue”.

He pulled out of the Antigua Hawksbills franchise for the Caribbean Premier League (CPL) and remained absent from the subsequent home series against Bangladesh. He hasn’t appeared in a match in or for the West Indies since.

At the time, he had 21 Tests and 28 ODIs to his name over five years. His averages of 27.48 and 27.57 were virtually identical and modest, his talent obvious.
Two of his three Test hundreds were compiled in each innings against Bangladesh in Dhaka in 2012, placing him in the elevated company of the eight celebrated West Indians to have previously achieved such a double — George Headley and Clyde Walcott (each twice), Everton Weekes, Garry Sobers, Rohan Kanhai, Lawrence Rowe, Gordon Greenidge and Brian Lara.

From a strong home cricketing background and educated at England’s renowned sporting school, Millfield, Powell had been described by West Indies Cricket Board (WICB) president Dave Cameron as a potential future West Indies captain. Disagreement over the circumstances of his withdrawal from the game soured the relationship, leading to an animated exchange between Powell and the WICB. They are no nearer to reconciliation.
In a lengthy statement outlining his case, Powell claimed the director of cricket Richard Pybus accused him of “walking off the job” and insisted that unless he provided him with written details of the personal issue that prompted his decision and returned to “grassroots cricket”, his chance of getting back into the West Indies team would be compromised.

“In my mind, I immediately compared this to other situations in the recent past in which senior players in the West Indies team had been expected to follow the same protocol,” he noted. “I wondered, why me? Feeling deflated and confused by several months of roller coaster events, I made a firm decision to take a step away from the game in its entirety to reflect and refresh.”

The WICB was quick to give its side of the story. It pointed out that Powell was under contract “with certain contractural obligations” when he opted out, claimed that he had turned down offers of support from Richardson and Gibson and stressed that “the selection to the West Indies team is not a right or entitlement of any player and is at the discretion of the independent selection panel.”

It asserted that Pybus “categorically” rejected Powell’s claim that he was coerced into divulging details of his personal matters.
There seems no immediate prospect of Powell rushing back into West Indies cricket. He did not play for the Leeward Islands in either the Nagico Pro50 one-day tournament in January or the ongoing first-class WICB Professional Cricket League (PCL); he turned down an offer to join the new St.Kitts franchise in the CPL in June-July.

Powell senior said his son is adamant that he will come back to West Indies cricket when he believes he is properly prepared. In the meantime, England in the summer is his next stepping stone after Sri Lanka.

They need to search again for Kraigg Brathwaite’s partner against England after Gayle declared his unavailability; nor is there any guarantee that the West Indies’ most experienced and proven batsman will be ready to take on Australia.

Had he played in the just completed CPL, Powell would be a prime candidate. Instead, the chances are running out for a talented batsman with a potentially long career ahead.