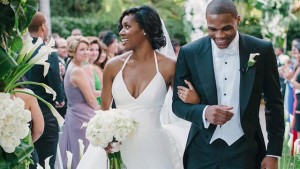 Oklahoma City star point guard Russell Westbrook met Nina Earl when they attended UCLA. They were both on their respective basketball teams in Westwood.

And almost one year after that, the couple was married in Beverly Hills, Calif., over the weekend.

The first pictures of the affair have arrived, and Mr. Fashion himself lived up to his reputation.

Congratulations to the newlyweds!