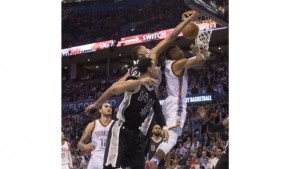 This past NBA offseason was full of excitement over the potential for a hyper-competitive top of the Western Conference. The first matchup between those elite teams did not disappoint.

The Oklahoma City Thunder defeated the San Antonio Spurs 112-106 Wednesday night at Chesapeake Energy Arena in a tight, very entertaining contest that was not decided until its final few possessions. While the run-up to the game was dominated by the debuts of new Thunder head coach Billy Donovan and Spurs free-agent coup LaMarcus Aldridge and the return of 2014 MVP Kevin Durant, Russell Westbrook and Kawhi Leonard were the most notable performers.

Despite the high level of play throughout, the game’s biggest possession featured a questionable decision by one of San Antonio’s fixtures. Down 108-106 with 21 seconds on the clock and the shot clock turned off, the Spurs ran a play that gave wing Danny Green the ball against very good defense Thunder defense. But Green opted not to look for other options and hoisted a questionable three-pointer with 12 seconds left. Steven Adams blocked the shot and OKC recovered in time to advance with a timeout. Durant hit two free throws on the ensuing possession to lock up the win.

It was an iffy play for Green and the Spurs in part because Leonard had been so excellent all night. The 24-year-old small forward topped 30 points for the first time in the regular season with 32 on 13-of-22 shooting from the field, looking like a player capable of assuming a role as San Antonio’s first or second offense option.

Leonard added two blocks and three steals while serving as the primary defender on Durant, who struggled to 22 points (6-of-19 FG, 8-of-8 FT) in his first competitive game since February. The good news is that KD showed flashes of dominance and could very well have put up an excellent line against a lesser defender.

Yet Donovan was hired to replace Scott Brooks so that OKC would not have to depend solely on Durant and Westbrook, and in that respect Wednesday was a major success. Enes Kanter put up huge numbers off the bench with 15 points on 7-of-11 shooting and 16 rebounds (including five offensive), albeit alongside a hefty portion of his characteristically iffy defense at the other end.

And Dion Waiters scored four of his eight points over a 37-second span late in the game to tie the game and give the Thunder a lead that that they never relinquished.

However, it was Westbrook who led the OKC attack and ensured that they would not submit to Leonard’s excellent night. Last season’s NBA-leading scorer went for 33 points (12-of-23 FG, 3-of-6 3FG, 6-of-7 FT) and 10 assists in a relatively subdued performance compared to 2014-15’s everywhere-at-once style. Those who prefer Westbrook in “controlled chaos” mode saw a lot to like on Wednesday.

The first-game returns were not so great for Aldridge, who came to San Antonio with the expectation that he would solidify the Spurs’ status as one of the league’s top two or three title contenders. This result did nothing to change that feeling, but it did suggest that Aldridge will need some time to acclimate to his new team. The four-time All-Star went 4-of-12 from the field with five rebounds in 32 minutes, seeing the ball far less than he did with the Portland Trail Blazers. Then again, we should probably afford him the same leeway as Durant and admit that he will have easier nights against defenders other than Serge Ibaka.

Perhaps it’s tempting to over-analyze because the quality of this first Thunder-Spurs game was high enough to inspire thoughts of epic playoff series this spring. After one game, we can already say that these two teams at the top of the West are very, very good.