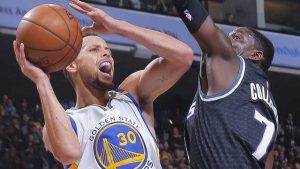 OAKLAND, Calif. — Missing his emotional leader and one of four All-Stars on Golden State’s roster after Draymond Green was ejected late in the second quarter, Warriors coach Steve Kerr was curious how his team would respond in its final tuneup before the break.

A big run in the third quarter quieted whatever concern Kerr had.

Klay Thompson scored 10 of his 35 points during the outburst and Golden State beat the Sacramento Kings 109-86 on Wednesday night.

“Him getting thrown out kind of woke us up a bit,” Kevin Durant said of Green’s ejection. “That third quarter was one of the best quarters we’ve had all year. We just upped our intensity. We made them feel us.”

Stephen Curry added 13 points and nine assists, and Durant had 21 points, seven rebounds and seven assists as the Warriors bounced back from a loss in Denver two nights earlier to head into the All-Star break an NBA-best 47-9.

Thompson, Curry and Durant will represent the Western Conference in Sunday’s All-Star Game at New Orleans, along with the fiery and vocal Green, who was ejected for the first time this season after picking up consecutive technical fouls in the second quarter.

It turned out to be the pivotal swing Golden State needed.

“I thought our guys just responded beautifully,” Kerr said. “We were in tough shape without Draymond. We struggle sometimes without him to bring the energy. That wasn’t the case tonight.”

DeMarcus Cousins, who will also play for Kerr and the West, had 13 points and six assists for Sacramento. Matt Barnes added 15 points and Darren Collison scored 14.

Golden State looked like a team that could use the break before scoring 22 straight points in the third quarter to pull away.

Thompson, who topped 30 points for the fifth time this season, made a pair of 3-pointers and had two steals during the spurt. Durant added four points and Curry made a 3, then later lobbed a short pass to JaVale McGee for a dunk.

“We knew it would happen,” Cousins said. “It was all downhill from there. We just don’t respond well to that, that last hit.”

Durant added his own signature dunk in the fourth quarter to extend the margin to 101-69.

That was in sharp contrast to how poorly Kerr’s team played earlier in the game.

The Warriors led for most of the first half before coming unraveled late and giving up seven consecutive points to end the second quarter.

Green’s ejection was symptomatic of Golden State’s sluggish start. He was hit with back-to-back technicals with 35.7 seconds left after being called for a foul on Cousins.

“Draymond’s always going to play on that edge and tonight he crossed that edge,” Kerr said. “We don’t want to take away that chip on his shoulder, but we need him on the floor, too.”

The Kings, who beat the Warriors in overtime on Feb. 4, couldn’t capitalize and were outscored 42-15 in the third quarter.

Kings: Sacramento made five 3-pointers in the first quarter but went 2 of 15 from beyond the arc after that. … Aaron Afflalo started but did not play in the second half due to a hamstring injury. He had four points and two assists.

Warriors: Curry came from behind to block a shot by Sacramento 7-footer Willie Cauley-Stein with 1.9 seconds left in the first quarter. . Zaza Pachulia (strained right rotator cuff) and David West (thumb) could rejoin the team for practice Wednesday when Golden State returns from the break.

Patrick McCaw didn’t have much of a stat line (four points, two rebounds, one assist) but several Warriors players and Kerr credited the rookie for being a key component of the run in the third quarter. “He had a ton of deflections. He was all over the place,” Kerr said. “He seemed to be in the middle of every play defensively.”

As good as Golden State looked in the third quarter, Thompson is convinced the Warriors can be better. “I’m not going to say it’s as good as it gets because I think we still have a lot of potential,” Thompson said after shooting 12 of 18. “But that was really cool. We were playing great defense, picking up steals. I still think we have another gear.”

Kings: Host the Denver Nuggets on Feb. 23 in a matchup of teams fighting for eighth place in the West.

Warriors: Go for their 10th consecutive win over the Clippers on Feb. 23 at Oracle Arena. Golden State has won all three meetings this season.

Check out the team sites for the Sacramento Kings and the Golden State Warriors for more game coverage.