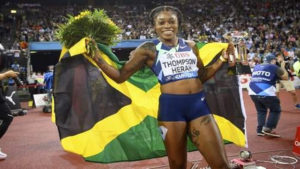 After an ordinary start, Thompson-Herah blew past the field with a devastating second half of the race as Great Britain’s Dina Asher-Smith ran a season best 10.87 seconds for second and Ajla del Ponte of Switzerland was third in 10.93 seconds.

Jamaica’s other entrant, Natasha Morrison was seventh in 11.10 seconds.

Shanieka Ricketts was second in the women’s triple jump with 14.64m (1.3m/s) on her final effort to leap frog compatriot Kimberly Williams who had a best mark of 14.47m (1.3m/s).