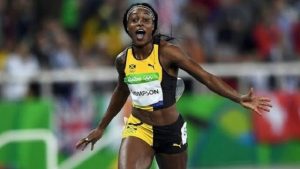 Thompson scorched to victory in a new meeting record of 10.72 seconds ahead of Dutch rival Dafne Schippers.

It was her 12th consecutive victory in the blue-riband event this year, occurring weeks after wrapping up gold medals in the 100 and 200m at the Rio Olympics.

“Now I can finally go back home,” said the 24-year-old Jamaican.“I keep on smiling because this season was really great. If I had to summarise it in one word: Wonderful!”

European champion Schippers clocked 10.97sec for second ahead of another Jamaican Christania Williams.