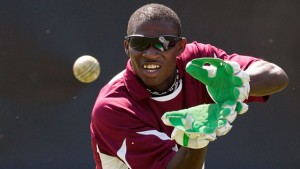 Resuming the final day of their ninth round WICB PCL contest on 139 for six and requiring only a further 26 for victory, the Leewards needed just 45 balls to complete victory at Warner Park.

Fittingly, they were led by their captain Devon Thomas who finished on 99 not out, narrowly falling short of his second first class century.

He, along with Jeremiah Louis, who finished on 18 not out, carried their seventh wicket stand to 60, to see the Hurricanes over the line.

All told, the right-handed Thomas struck nine fours and two sixes, in an innings spanning 159 balls in a shade under three hours at the crease.

Louis spent just over three-quarters of an hour at the crease and faced 39 balls.

Resuming on 78, Thomas kept the scoreboard ticking over and the Hurricanes reached the 150-run mark in the fourth over of the day.

The pair brought up their 50-run stand with eight more runs added and Jamaica captain Tamar Lambert recalled leg-spinner Odean Brown in one last attempt to break the stand.

However, with victory in sight, Thomas lofted the bowler for a six and a four, to end the game in style.