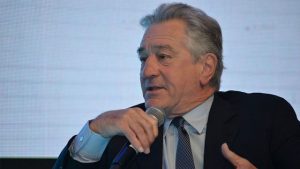 Robert De Niro speaking at the Palazzo Versace in Dubai

He was part of a delegation, that also included Prime Minister Gaston Browne, on a mission to promote investments in the picturesque twin islands.

De Niro, a Special Envoy of Antigua and Barbuda since 2014, is an investor himself, together with Australian billionaire James Packer, in the US$250 million Paradise Found hotel project on Barbuda which will begin construction early next year.

“It’s a beautiful place, that’s why I’m involved in this project,” De Niro shared during a conference at the Palazzo Versace in Dubai, sponsored by Arton Capital, a leading global citizenship advisory firm.

Speaking alongside Prime Minister Browne, the actor was keen to reassure Middle East investors that this is a sound economic proposition. One such investor, brokered by Arton Capital, is the developer of the Callaloo Cay project, an exclusive US$ 150 million resort on Antigua’s south coast.

In addition to the long list of concessions for foreign investors, such as a 25-year tax exemption, another significant benefit is Antigua’s Citizenship by Investment Programme (CIP) which fuels local economic growth. Of all the countries with an active CIP, Antigua and Barbuda’s passport has been ranked as the most powerful in the Caribbean and the fourth best in the world by Arton’s Passport Index, a global ranking of the world’s passports. Antigua citizens can travel visa-free to more than 124 countries including Canada, Europe’s Schengen zone, the United Kingdom, Singapore and Hong Kong, among others.

On the subject of global citizenship, De Niro shared: “We can have our differences, but as the world gets smaller and people become more dependent on each other, we have no choice but to be concerned about our own self perseverance.” (Adapted from Financial Buzz)