These Teams Are Reportedly on James Harden’s Trade Wishlist 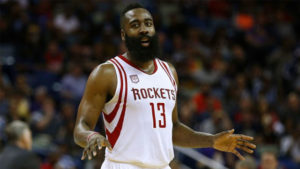 With rumors swirling that the Houston Rockets are ready to move on from James Harden, plenty of people are keeping a close eye on where the superstar will end up. That includes Harden, who reportedly has put together a wishlist of teams that he’d like to join if his time in Houston is at an end.

This latest rumor comes from 5 Reasons Sports, who reports that Harden’s list of possible matches includes the 76ers, the Heat, and the Nets.

“Sources tell me that Houston Rockets Guard James Harden has quietly communicated with people close to him that if the Rockets decide to blow it up, he already has a few teams in mind,” Ethan J. Skolnick wrote on Twitter. “The Miami Heat, Brooklyn Nets, & Philadelphia 76ers are among those teams.”

In the case of the Sixers, the interest might be mutual. NBA insider and regular scoop-getter Shams Charania said that Doc Rivers and Co. are considering a trade package for the All-Star.

“I’m told Philadelphia is expected to be interested in and pursue James Harden,” Charania said. However, Charania also feels that Houston is not likely to let Harden walk.

In other news that’s related, Charania reported on Wednesday that Russell Westbrook wants to leave the Rockets Organization.