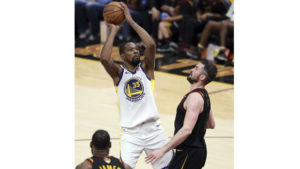 Golden State Warriors’ Kevin Durant shoots over Cleveland Cavaliers’ Kevin Love during the second half of Game 3 of basketball’s NBA Finals, Wednesday, June 6, 2018, in Cleveland. The Warriors defeated the Cavaliers 110-102 to take a 3-0 lead in the series.

CLEVELAND (AP) — The Latest on the NBA Finals from Wednesday’s Game 3 (all times local):

Kevin Durant scored a playoff career-high 43 points, including a long clinching 3-pointer, Stephen Curry ended a nightmarish night with five straight to give Golden State the lead for good, and the Warriors took a 3-0 lead in the NBA Finals with a 110-102 victory over Cleveland.

“The shot clock was running down, I was pretty far out, I just wanted to get a look,” Durant said of his long 3-pointer. “I didn’t want to run there and shoot a bad shot, fall on the ground and they got numbers going the other way so I decided to pull up.”

Curry shot just 3 for 16 but he made a layup with the Warriors down one and followed with his only 3-pointer of the game for a four-point lead with a little more than 2 ½ minutes remaining.

The Warriors have a 3-0 lead for the second straight year. They finished the Cavaliers off in five games in 2017.

LeBron James had 33 points, 11 assists and 10 rebounds, but his Cavaliers will have to become the first team to climb out of a 3-0 hole in the NBA Finals.

LeBron James is carrying the Cavaliers in the NBA Finals, as usual. Rodney Hood is helping, which is unexpected.

Out of the rotation of late, Hood has three baskets in the final period and 15 points off the bench. James leads the Cavaliers with 26 points, 11 assists and 10 rebounds.

Kevin Durant has 38 points for the Warriors, who are trying to win with next to nothing from Stephen Curry. He has four points on 1-for-14 shooting

Kevin Durant has Golden State a quarter away from a 3-0 lead in the NBA Finals.

The Warriors have an 83-81 edge heading into the final period, surging ahead with one of their patented third-quarter runs even while Stephen Curry continues to struggle.

But Durant has been brilliant, with 34 points, 13 rebounds and five assists. That has more than compensated for Curry’s 1-for-11 outing, including 0 for 7 from 3-point range.

LeBron James has 21 points, 11 assists and seven rebounds for the Cavaliers, who were outscored 31-23 in the third.

Good news for the Cavaliers: They finally got a free throw attempt, after LeBron James’ basket early in the second half.

Bad news for the Cavaliers: Golden State has all the other points in the third quarter.

James was fouled while scoring after Cleveland didn’t attempt a free throw in the first half, when it led by as many as 13 points.

Cleveland has a 58-52 halftime lead in Game 3 of the NBA Finals that would be much bigger if not for Kevin Durant.

Durant scored 24 points, the only Warriors player in double figures in a foul-plagued, poor-shooting first half for Stephen Curry.

LeBron James has 14 points, nine assists and six rebounds, and he’s getting more help than his counterpart Durant. Kevin Love had 15 points and 10 rebounds, J.R. Smith scored 10 points, and Rodney Hood made a nice contribution with six.

Cleveland led by as much as 13 in a half where Curry committed three fouls and was 1 for 8 from the field.

LeBron James is on. Stephen Curry and Klay Thompson are way off.

James is up to 14 points, six assists and five rebounds midway through the second quarter, leading Cleveland to a 44-34 advantage. The Cavaliers also are getting a strong performance from J.R. Smith, with 10 points on 4-of-6 shooting.

Curry is just 1 for 8, missing all five 3-pointers, a game after making an NBA Finals-record nine 3s. Thompson, his backcourt mate, is 1 for 6.

The 2017 NBA Finals MVP had 13 points and was 4 for 4 from the field as Golden State cut a 12-point deficit down to 29-28 after one quarter. Durant also grabbed all of the Warriors’ seven rebounds.

Andre Iguodala entered midway through the period for his debut in this series and made his lone shot. LeBron James had six points and five assists for the Cavaliers.

The Cavaliers quickly made seven of their first 13 shots — and throw out one of the misses, because it was on purpose.

LeBron James’ pass to himself off the backboard for a slam dunk was the early highlight as Cleveland raced to a 16-4 lead and are up 22-14 in the first quarter.

The 12-point margin represented the biggest lead of the series for the Cavaliers, who were ahead by 11 in Game 1.

J.R. Smith and Kevin Love both made 3-pointers and scored five points in the strong start.

JaVale McGee remains in the starting lineup even though Andre Iguodala is available for Golden State, which is trying for a 3-0 lead in the NBA Finals for the second straight year.

The Warriors could become the 14th team to win the first three games of the NBA Finals. All of the previous 13 have won the series.

The Cavaliers are used to being in this position. This is the fourth time in their five NBA Finals appearances that they’ve come home to host Game 3 staring at a 2-0 deficit.

They are the last team to get swept in the finals, dropping four straight to San Antonio in 2007.

Andre Iguodala has been cleared to play for the Golden State Warriors in Game 3 of the NBA Finals.

Iguodala has been dealing with a bone bruise around his left knee. He has not played since Game 3 of the Western Conference finals against Houston, and the Warriors have gone 4-2 since he got hurt.

Iguodala’s return figures to be another big boost for the Warriors, who lead the Cavaliers 2-0 in this series and now get the 2015 NBA Finals MVP back into their rotation.

The Cavaliers’ next-door neighbors were planning to attend Game 3.

Indians manager Terry Francona and more than a dozen of his players were scrambling for tickets in the hours leading up to tip-off. Francona, a Cavs season-ticket holder and avid hoops fan, has been excitedly counting down the days before the game.

The Brewers considered staying, but the team’s travel plans to Philadelphia were already set and the players were going to convene at their hotel to watch the game. Brewers third baseman Travis Shaw, who went to Kent State and grew up in Northeast Ohio, wore a LeBron James jersey in the clubhouse the past two days.

Manager Craig Counsell joked that he was going to let Shaw break the team’s dress code and wear the jersey on the plane.

They know the forward well.

Hood is expected to get more playing time in Game 3 of the NBA Finals after barely getting on the floor during the first two games at Golden State. Cavs coach Tyronn Lue needs some kind of spark with J.R. Smith and Kyle Korver struggling and he’s planning to give minutes to Hood, who began the postseason in the starting lineup but has seen his role reduced.

Before he was traded by Utah to Cleveland in February, Hood scored 26 points in a game against Golden State.

Warriors coach Steve Kerr says Hood is a talented player, noting that “he’s a 3-point shooter. He’s a good driver. So we know he’s very capable of coming in and being productive.”

Hood had a rough go against the Warriors in the playoffs last year, making just 1 of 15 3s for the Jazz.

Golden State’s Draymond Green is about to break one of Wilt Chamberlain’s records.

No one in Warriors history has more postseason rebounds than Chamberlain, who grabbed 922 in his time with the Philadelphia and San Francisco Warriors. Green has 921 playoff rebounds so far in his career.

Of course, it bears noting that Chamberlain grabbed his in only 36 games.

Wednesday night’s Game 3 of the NBA Finals will be the 100th playoff game of Green’s tenure with Golden State. He’ll be the second Warrior to play in 100 postseason contests, joining only Klay Thompson.

And if Stephen Curry makes one 3-pointer in Game 3, he will become the first player in NBA history with a 3-pointer in 43 consecutive playoff road games. He’s currently tied with Reggie Miller as the only shooters to do that in 42 straight postseason contests away from home.

Game 3 of the NBA Finals gives Cleveland an opportunity for its ninth consecutive home playoff win, which would be a franchise record.

Cleveland is 8-1 at home in these playoffs, losing Game 1 of the first round against Indiana but being perfect — sometimes dominant — since. The Cavaliers have outscored opponents by an average of 12 points per game in their last eight home contests.

There are also some milestones awaiting LeBron James in Game 3.

When he takes the floor, it’ll be for the 238th playoff game of his career. That will give him outright possession of fourth place in NBA history, breaking his tie with Kareem Abdul-Jabbar in that category.

And if he scores 30 in Game 3 — or any postseason game for the rest of his career — he will break a tie with Michael Jordan for the most 30-point playoff games in league history. James and Jordan both have scored at least that many 109 times in playoff games.

The Golden State Warriors expect Andre Iguodala to play in Game 3 of the NBA Finals on Wednesday night.

Iguodala has been dealing with a bone bruise around his left knee. He has not played since Game 3 of the Western Conference finals against Houston, and the Warriors have gone 4-2 since he got hurt.

Warriors coach Steve Kerr says Iguodala will warm up with the intention of playing in Game 3.

Iguodala’s return would be another big boost for the Warriors, who lead the Cleveland Cavaliers 2-0 in this title series and now get the 2015 NBA Finals MVP back into their rotation.

For LeBron James, losing is no longer an option.

With Cleveland down 2-0 to Golden State in the NBA Finals, James knows better than anyone that he and the Cavaliers are facing a must-win situation in Game 3 on Wednesday night at Quicken Loans Arena.

No team has ever come back from a 3-0 deficit to win a playoff series. James acknowledged the Cavs are facing a “tall task” as it is against the Warriors, who are seeking their second straight title and third in four years.

Stephen Curry made nine 3-pointers in Golden State’s Game 2 win, and the Warriors, who live by a “Strength In Numbers” slogan, could get back forward Andre Iguodala for Game 3. Iguodala has missed the past six games with a knee injury but practiced Tuesday.

Cavs coach Tyronn Lue plans to switch up his rotation and play forward Rodney Hood, whose role has been reduced since the start of the postseason.