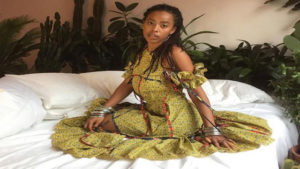 A 33-year-old granddaughter of Caribbean-born reggae legend, Robert ‘Nesta’ Marley, is reportedly planning on suing a California police department after she and two friends were detained for being mistaken for thieves at an Airbnb in San Bernadino, CA.

Donisha Prendergast, the filmmaker daughter of Bob Marley’s adopted daughter, Sharon Marley Prendergast, and her two friends Kells Fyffee Marshall and Komi-Oluwa Olafimihan, have served the Rialto Police Department with notice of a pending lawsuit according to the New York Daily News.

The notice comes over a week after the three friends were swarmed by police while checking out an Airbnb rental. In a Facebook post, Fyffe-Marshall said upon leaving the property, they found themselves surrounded by “7 cop cars.”

The group was in the state for the Kaya Fest, where the Marley brothers performed. Prendergast posted two videos on Instagram showing the unpleasant run-in with four police officers who responded to a 911 call from a neighbor of the house they were staying in.

The officers demanded the women put their hands in the air and informed them that “there was also a helicopter” tracking their movements.

The police interviewed Prendergast and her friends for around 22 minutes before eventually realizing that they were “Airbnb renters and were at the residence as potential guests,” according to police officials.

In an official statement, authorities claim Prendergast, Marshall and Olafimihan were never detained, only questioned.

Prendergast, in commenting on the incident said: “We cannot remove ourselves from situations that continue to implicate our brothers and sisters in a spiritual, physical, emotional and psychological war.”

“It is the inaction of those who could have and didn’t that has left our world in the state it is today,” she added. “Our blood is shared, so are our joys and pains. When the rain falls, it doesn’t just fall on one man’s house top… So don’t you forget who you are and where you stand in the struggle.”

This is the latest in a series of similar incidents in the United States where cops were called in to arrest people of color. Just last month two African-American men were arrested at a Starbucks coffee shop in Philadelphia while waiting for a friend, and this week, Nordstrom was forced to apologize to three black teens shopping for prom at a Nordstrom Rack in Brentwood, Mo., near St. Louis, after they were falsely accused of shoplifting and had the police called on them as well.