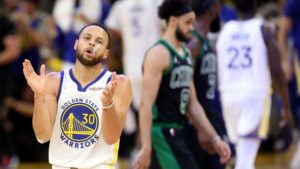 Even if the Golden State Warriors don’t win the NBA Finals, it won’t be 2016.

That year they led the Finals against LeBron James and the Cleveland Cavaliers 3-1. They lost the last three games including a historic Game 7. That has stuck to the franchise.

This isn’t the same situation, but many of the same key figures are around six years later as the team leads the Boston Celtics 3-2 in the NBA Finals. They won’t want to mess around with another Game 7, if they can help it.

The Warriors are 3.5-point underdogs at BetMGM against the Celtics for Game 6 on Thursday. Boston being favored makes some sense, considering the Celtics are a fantastic team and they’re back at home facing elimination. But it also ignores a bit how the series has gone.

The Warriors have locked up Boston’s offense the past two games. The Celtics haven’t reached 100 points in either game, both Warriors wins that turned around the series. A lot of Boston’s offensive issues are self-inflicted, as turnovers have piled up. But Golden State has something to do with those turnovers. Their defense, which is generally underrated, has been fantastic as they’ve taken over the series. It looks like Steve Kerr and his staff have figured out Boston.

Taking the points in the NBA Finals, or the playoffs in general, doesn’t seem prudent anymore. All five Finals games have been decided by double digits. The playoffs as a whole have been filled with lopsided games, for whatever reason. It has been rare for an underdog to cover and not win. That’s why Golden State +140 seems like the right play for Thursday night. Suddenly the Warriors look like the better team, one with the best player in the series (Stephen Curry) and all the momentum.

Basketball fans will be hoping for a Boston win and a Game 7. Golden State doesn’t want to take its chances.

U.S. Open begins
The U.S. Open started Thursday, with Justin Thomas and Rory McIlroy as the betting favorites. Here are some picks and value bets from Yahoo’s Jay Busbee and Pamela Maldonado:

Oh yeah, there’s baseball too
In between a fun Game 6 in the NBA and a major golf tournament, baseball has a typical Thursday schedule.

There are nine games on the MLB schedule, including four afternoon games. The best team in baseball plays at night, as the New York Yankees take on the Tampa Bay Rays. The Rays are usually competitive with the Yankees, but the Yankees took the first two game of this series and have now won six in a row. They have a silly 46-16 record. They are massive -300 favorites against a good Rays team and it seems like that should lead bettors to take the Rays. It’s just hard to fade the Yankees.

What’s the best bet?
As said above, taking the points in the NBA playoffs this season seems like the wrong move. Most games have been lopsided. That’s why I’ll go with Golden State on the moneyline at +140. Maybe this is the first NBA game in a while in which the underdog covers and doesn’t win, but it hasn’t happened very often this postseason. And I believe the Warriors have solved the Celtics.