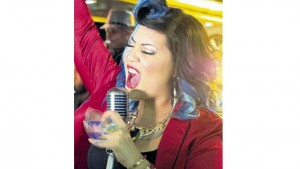 Tessanne Chin in a scene from her latest video Fire, released on Monday

SONGBIRD Tessanne Chin recently released the video for her latest single, Fire. The video, shot on location in Jamaica and directed by Nathan Patrick, was premiered exclusively on The Boom Box on Monday.

“I want the video to represent the message of the song which, to me, is a modern-day soulful power anthem without it being the typical boy-girl scenario.

“Yes, I want it to be fun, but I also want to embrace the wonderful authority that comes from knowing yourself and your worth and owning your fierceness no matter who, what, where, when or how. Own your Fire,” said Chin.

The single, released on the Justice League Music Group Label in May, is featured as the soundtrack for American shampoo Clear Scalp and Hair.

Patrick shared the concept for the video.

“It has a throwback vibe which, I think, represents the feel of the song perfectly. It’s colourful and fun and brings attention to the music, it’s all about the music,” the director said.

Chin, the winner of Season 5 of NBC’s The Voice, has had a busy 2015 with several appearances including performances at the Daytime Emmy Awards in Los Angeles in April and the PBS National Memorial Day Program in Washington DC in May.