Team St. Kitts and Nevis Underway At the Commonwealth Games 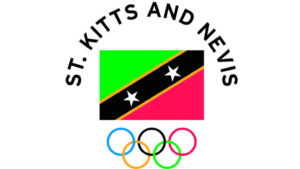 As competition got underway for Team SKN on Saturday 7 April, SKNOC can report that athletes have been working hard in their respective disciplines. Beach Volleyball pair, Hodge and Seabrookes, put in their best efforts on Day One of the preliminaries but went down 2-0 against the all professional Stewart and Williams of Trinidad and Tobago. In the final analysis, a better defence from Team Trinbago helped them to hold on for the win with final scores of (21-14, 21-14).

On the Track, the sprinters made up for the sad exit of injured sprinting ace, Antoine Adams. All three athletes advanced from the preliminaries to the semi-finals. First was Shenel Crooke whose strong, second-placed, 11.62 gave her automatic qualification for the next round. Later in the semis a very strong first half of the race was probably negated by a slow start and her eventual 11.69 was not enough for a berth in the finals.

Next up was Jason Rogers who, after leading the pack for about 70 metres, seemed to throttle back but gained qualification in the group of fastest finishers after the automatic qualifiers. In the semi-finals Jason drew the No. 1 seed and training partner Yohan Blake. This time he ran all the way making a strong third place finish (10.21s) behind Blake and Gemili of England, enough to put him through to the Finals.

The youngest athlete in his race and another debutant at the Commonwealth Games, Warren Hazel announced his arrival at The Games with a strong race. He pushed hard in the first 300 metres of his 400m race, leading the race for a significant time and although he seemed to run out of legs during the final stretch, his 46.83 was enough to advance him to the semi-finals.

Coming Up – Our Table Tennis Team will get their competition underway on Tuesday 10 April, with four matches in singles competition. Newcomer, Shaquan Hodge, takes on Buwaneka Jayasingha Mudiyanselage at 10:50am (8:50pm local time) before facing Simon Tomlinson of Jamaica at 5:10pm (3:10am local time). Angelisa Freeman returns to Commonwealth competition having debuted in Glasgow in 2014. She takes on Fatimah Khan of Pakistan at 12:50pm (10:50pm local time) then faces Chloe Thomas of Wales at 7:10pm (5:10am local time). “Right now, Table Tennis is going through a rebuilding and restructuring process in St. Kitts and Nevis. Just our presence here with these two players is a significant achievement,” Coach and Association President, Calvin Lake stated. “I know we are going to see bigger and better things in time to come,” he said.

President Alphonso Bridgewater commented, “All considered it was a much better day yesterday for our Team with Hodge and Seabrookes coming off court a much respected team after their valiant efforts, and an impressive start for Shenel Crooke’s debut at the Commonwealth Games. I congratulate all the Track and Field athletes who made it to the semi and semi-finals. After today, focus shifts to Table Tennis where we have the baby of the team, Shaquan Hodge, and where we have bright hopes for the future.”

Follow Team SKN
Following the announcement of Flow Sports as official Caribbean broadcaster of the 2018 Gold Coast Commonwealth Games (GC2018), St. Kitts and Nevis fans will be able to receive live and exclusive coverage of Team SKN on Flow Sports 1, Flow Sports 2 and up to three additional “Flow Sports Extra” channels. Flow’s mobile customers will also have live access via WiFi or Mobile Data to the Games via the Flow Sports 1 App.

Team SKN fans are also invited to follow their teams at www.sknoc.org, @SKNOC, SKNOlympic and @GC2018.

GC2018 will welcome more than 6,600 athletes and team officials from 71 Commonwealth nations and territories to the Gold Coast and event cities Brisbane, Cairns and Townsville, to share in the celebration of sport, entertainment and culture. The largest sporting event to be staged in Australia this decade, GC2018 will feature the largest integrated sports program in Commonwealth Games history, comprising 18 sports and seven para-sports. Beach Volleyball, Para Triathlon and Women’s Rugby Sevens will make their Commonwealth Games debuts and for the first time at a Commonwealth Games, an equal number of men’s and women’s medal events will be contested.