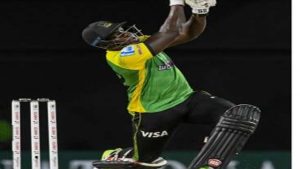 WHILE welcoming their making the final four as a step in the right direction, Jamaica Tallawahs Captain Rovman Powell is expecting more from players if the franchise is to cash in at the business end of this Hero Caribbean Premier League (CPL) Twenty20 tournament.

Powell, reflecting on last season’s failure when the Jamaican franchise placed fifth in the six-team tournament, is optimistic that his squad can capitalise on the turaround in fortune, starting with today’s play-off contest against St Lucia Kings at Providence in Guyana.

This encounter between the third- and fourth-placed teams is scheduled for 6:00 pm Jamaica time, after top two finishers Barbados Royals and Guyana Amazon Warriors do battle at 9:00 am.

Having won only four of their 10 games in the preliminary stages, which saw them placing fourth on nine points, Powell admitted that his team have at times been found wanting in their performances. However, he is now backing their experience and potential as a collective unit to come to the fore.

Their last game against the Kings ended in a no-result on Sunday due to inclement weather.

“It’s been a up and down season for us as a franchise but, having said that, I think the guys have played some good cricket in patches.