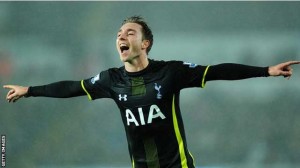 The Dane found space to fire low past Gerhard Tremmel as the game neared injury time at the Liberty Stadium.

Mauricio Pochettino’s Tottenham will now look at fixtures against Burnley and Leicester City either side of Christmas Day as games which could lift them into the Champions League qualification places.

During a season in which Spurs have struggled to balance their Europa League progression with league commitments, victory took their tally to 12 points from a possible 24 in games after European excursions.

Swansea, without a win over the visitors in 32 years, will rue wasted chances and a sloppy start where Kane ended Tottenham’s three-game goal drought.

Bony, a player whom Swansea manager Garry Monk said will command an “astronomical fee” if he leaves in the January transfer window, tormented the Tottenham defence.

Although he was denied early on by a smart Hugo Lloris save, he fired in from close range three minutes into the second half after his initial effort was blocked following Wayne Routledge’s cross.

But Eriksen cut inside before shooting low to stand-in keeper Tremmel’s right as Spurs secured a sixth win in seven Premier League games against Swansea.

Swansea City manager Garry Monk: “It was a difficult start and we gave away a cheap goal but we started to create after that. There looked to be only one winner in the second half when we levelled and then there was the classic sucker-punch.

“An individual mistake has ended up costing us. It’s mesmerising how we didn’t win that game. We didn’t deserve that and we came away with no points from such a great effort.”

Tottenham manager Mauricio Pochettino: “We showed character, it was a difficult game because Swansea are a very good team. In the second half, they pushed us a little bit but we defended well and we were always alive in the game.

“Harry Kane scored again, he’s still young but he has potential and he needs time to play and work hard.”