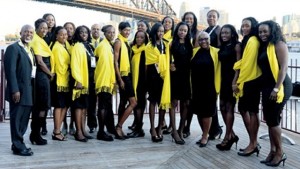 The Sunshine Girls team pose at the Official Candle Lighting and Welcoming Ceremony at Lunar Park in Sydney, Australia, yesterday. All 16 participating teams lit a candle to indicate a start to the games. (PHOTOS: COLLIN REID COURTESY OF PETROJAM, SUPREME VENTURES, COURTS AND SCOTIABANK)

The number four-ranked Sunshine Girls are among 16 nations competing for top honours at the tournament, which is split into four zones with Jamaica in Zone B along with archrival England, who are ranked number three, Scotland (11th) and Samoa.

History will be made today as Netball World Cup Sydney 2015 becomes the largest professional netball event ever hosted when 192 players from 16 countries across five regions come together.

Sixty-four matches will be played over 10 days to find the champions on August 16.

This year marks the 15th edition of the World Cup since its beginning over 50 years ago in 1963. All matches will be played within the Sydney Olympic Park with the majority played at Allphones Arena, and the remaining matches played at Netball Central, a newly constructed venue only a kilometre away.

Jamaica is one of four nations to have participated in every Netball World Cup, reaching the semi-finals on six occasions, and finishing among the top six nations. They have won the bronze medal three times in 1991, 2003 and 2007.

Trinidad & Tobago and Barbados are the other Caribbean teams participating in the Netball World Cup.