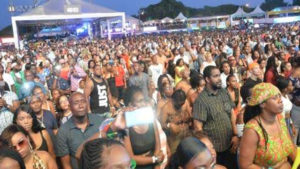 Organisers of the 27th Reggae Sumfest have hailed it as the “biggest and best ever” in its history. They pointed to the massive crowds and excellent delivery by artistes, during its live performance nights last Friday and Saturday at Catherine Hall Entertainment Centre in Montego Bay.

“This is just awesome in every way. Spiritually-wise, no violence … and that is what Reggae Sumfest is all about. Last night (Friday) was very, very big, the biggest ever until tonight (Saturday). The good thing is that everybody was all working together, the fire department, the police, the health department,” Sumfest boss Josef Bogdanovich told the Jamaica Observer shortly before the show ended Sunday morning.

“It is the biggest Sumfest ever, no question about that,” he stressed. “It went very, very well, everybody has done very well. The vendors are happy, the massive crowd is happy, the musicians, the security forces … everything has gone very, well this year.”

Russell said the strong line-up of artistes was the main reason for the tremendous support from patrons.

“The line-up is one of the key ingredients for the success of any show, and we had a great line-up, and that manifested itself in the crowd support.”

On both of the live nights, the crowd at times hindered the flow of patrons, particularly those in close proximity to the food courts.

A number of the patrons said organisers may have to find a new venue to stage the event, arguing that “Sumfest has outgrown the Catherine Hall Entertainment Centre”.

But, Russell told the Observer that there are no plans to relocate.

“We are looking to expand this venue; we don’t want to take it from here. This venue is a part of Montego Bay, so we are going to remain here,” he said.

American writer Pat Meschino, who has covered 25 stagings of Reggae Sumfest, believes this year’s event was the best she has attended.

“The size of the crowd is huge, and if it is not the biggest, it is definitely one of the biggest that I have ever witnessed,” said Meschino.

“They have been outstanding, they were just awesome and I am giving the festival two thumbs up,” said Meschino.

The week-long festival kicked off on July 14, with the day party ‘Morning Medz’, followed the next day by the street party, which was open to the public. On July 16, the all-white event was another success, as was the all-black birthday celebrations for popular Trinidadian soca artiste Bunji Garlin.

“I enjoyed the show to the fullness. I came out especially to see Buju, Christopher Martin, Beres Hammond and Romain Virgo, and they did not disappoint me. I really enjoyed myself and I am looking forward to next year’s festival,” she said.