Home / International / ‘Stop the steal’ organizer in hiding after riots, needs $2,000 a day for security

‘Stop the steal’ organizer in hiding after riots, needs $2,000 a day for security 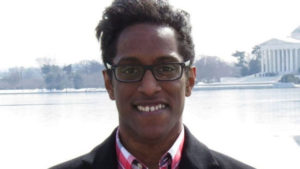 Twitter permanently banned the personal account of Ali Alexander as well as the page representing the ‘Stop The Steal’ movement.

According to a new report, Ali Alexander, a vocal leader of the ‘Stop The Steal’ movement, has asked supporters for donations to support a security detail.

The Daily Beast reported Alexander claimed to be in hiding, alleging that he is being targeted by “witches and Wiccans” who “are putting hexes and curses on us.” Before he went into hiding, he helped organize events supporting President Donald Trump and used social media to amplify right-wing messages.

He was even invited to a “White House Social Media Summit” after earning a retweet from Donald Trump Jr. when he used the platform to state Vice President-elect Kamala Harris is not an “American Black,” according to the report.

Alexander also began to frequently wear orange, due to what he claims to be divine direction.

“God gave me the color orange in December 2019,” Alexander tweeted on Election Day according to the Daily Beast. “He told me ‘orange would be the color of 2020.’ I’ve come to learn it means GOD’S POWER.”

This is not the only baseless claim spread by Alexander’s Twitter platform. According to Southern Poverty Law Center, he used the hashtag #JoeBidenIsSick to lead a baseless campaign against President-elect Joe Biden and claimed to have inside information on the former vice president’s health status.

According to the Daily Beast, Alexander has described himself as one of the “official originators” of the Jan. 6 rally in Washington where rioters attempted to take over the Capitol building resulting in multiple arrests and fatalities. During a rally in Arizona, he announced the event the outlet reported, and used the word “yet,” as a code word for violence.

“We’re going to convince them to not certify the vote on January 6 by marching hundreds of thousands, if not millions of patriots, to sit their butts in D.C. and close that city down, right?” Alexander said according to the Daily Beast. “And if we have to explore options after that…‘yet.’ Yet!”

The news outlet reported Alexander went on to deny any affiliation or responsibility for the chaotic, violent event. “I didn’t incite anything,” Alexander said in a video posted Friday to Twitter. “I didn’t do anything.”

According to SPLC, a law firm behind the ‘Stop The Steal’ movement registered the LLC for the organization in Montgomery, AL. last November. The law firm Baron Coleman represents not only Alexander, Proud Boys founder Gavin McInnes.

theGrio reported other right-wing extremists behind ‘Stop The Steal’ include former Tea Party organizer Amy Kremer, Mike Cernovich, and Jack Posobiec, who promoted the Pizzagate conspiracy. The group was deemed ” to be too extreme and too inept for mainstream Republicans to risk associating with them” according to the report.

His account was not the only one removed from Twitter and other platforms following the failed insurrection. theGrio reported Trump himself was banned from the social media platform for life.

“Given the renewed potential for violence surrounding this type of behavior in the coming days, we will permanently suspend accounts that are solely dedicated to sharing QAnon content,” Twitter said in an emailed statement.