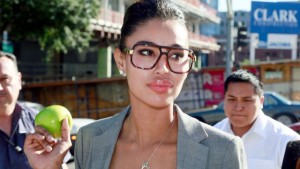 LOS ANGELES – The woman whose recording of Donald Sterling cost him the Los Angeles Clippers was forced Thursday to answer questions about recordings in which she and the billionaire discussed how to hide a house he bought her.

Several of the 500 recordings V. Stiviano made during a nearly four-year relationship with Sterling were played in Los Angeles Superior Court in his wife’s lawsuit to reclaim millions of dollars he lavished on the younger woman.

Donald Sterling foresaw the trouble the gifts posed for Stiviano, pointing out in one recording that they were community property, owned jointly by him and his wife of nearly 60 years. That is the basis for her lawsuit.

“You just can’t give somebody a gift,” he said in one recording. He then laughed and added, “Well, if they don’t know about it.”

“Do you think I can hide the house?” Stiviano asked.

After two days of testimony attempting to show that Sterling paid the full $1.8 million price for the Spanish-style duplex, there’s little to hide.

The question is whether a judge will make Stiviano relinquish the home, three luxury cars, including a Ferrari, and millions of dollars in cash, jewelry and clothing that an accountant valued conservatively at $3.6 million.

Her lawyer says most of the funds can’t be connected directly from Sterling to Stiviano and that the law doesn’t allow a spouse to go after a third party. Lawyers on both sides said there’s no precedent for such a case.

Stiviano denied that some of the 18 bank accounts where checks were deposited even belonged to her. When asked if it was mere coincidence that identical amounts left Sterling’s company and then showed up in accounts used to purchase the home, Stiviano pleaded ignorant and said she hadn’t signed the checks.

The trial has provided a backstory of sorts to the saga that played out last year when the recording of Donald Sterling telling Stiviano not to publicly associate with blacks culminated with his lifetime ban from the NBA and the record $2 billion sale of the team.

Stiviano said she loved Sterling and referred to him as her “hubby”and significant other, but said they never were romantic despite sharing a room on trips to Dubai, Paris and Las Vegas.

Shown several photos of her nuzzling the 80-year-old and asked if she was kissing him, she said: “I don’t know if you call duck lips or pucker lips kissing.”

Stiviano, 32, smiled broadly at times and was sassy at others, getting laughs from the gallery as she corrected O’Donnell’s pronunciation of designer Louis Vuitton.

When asked if she hated Shelly Sterling, she didn’t hold back.

“She is a bully,” she said. “That’s exactly what I thought she was: the evil witch of the west.”

Shelly Sterling looked back at friends in the gallery at points in the testimony and smiled.

Stiviano acknowledged that Donald Sterling had bought her cars, gave her $100,000 to invest in stocks and helped her buy her house with at least $727,000.

But she couldn’t identify how much of the remaining $1 million he contributed. She said some came from friends and relatives who gave her small bills she squirreled away in a bedroom drawer.

Accountant Jay Shapiro testified that he had traced funds from Sterling and found it unbelievable Stiviano’s drawer could have made a significant contribution.

“It would be an awful big drawer,” Shapiro said. “I find the entire story incredulous.”