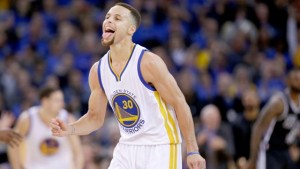 For the first time since 2005, the NBA playoffs will not have a team led by LeBron James competing for the Larry O’Brien.

To give you an idea how long ago 2005 was, the Oklahoma City Thunder were still known as the Seattle SuperSonics. Barack Obama had yet to formally announce his candidacy for President of the United States. The Marvel Cinematic Universe hadn’t even begun to take over our lives yet.

After a 13-year playoff run, though, James will be watching the postseason unfold in its entirety from his home, and Steph Curry admits that LeBron’s absence is “just different.”

“It’s different, but what is it? [Eight] straight Finals he went to?” Curry said, per ESPN. “I’m sure it’s a different experience for him, for better or worse.” While Steph understands that the show must go on, whether or not The King is involved in the playoffs, he’s also confident in LeBron’s ability to “regroup” for next year.

“Obviously the rest of the league continues to go, a lot of talent, a lot of great storylines, people chasing championships,” Curry said. “But he’s had an amazing run. Pretty sure he’ll be able to reset for next year and regroup. It’s just different.”

Meanwhile, James sees this upcoming offseason as a “very critical” time where he will assess what he needs to do in order to turn the franchise around as soon as possible. LeBron has already promised Lakers fans that their playoff drought “won’t last much longer.” Now he has to everything in his power to live up to his word.