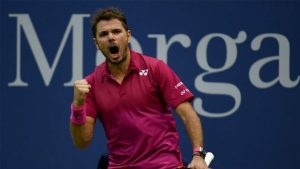 Though Djokovic came into the match with a 19-4 head-to-head advantage and two US Open titles under his belt, Wawrinka delivered the clutch performance Sunday under the bright lights of Arthur Ashe Stadium.

Early on, it looked as if the world No. 1 might run away with the contest. Djokovic jumped out to a 4-1 lead with precise shot selection, while Wawrinka struggled to keep up.

But Wawrinka soon found his rhythm and fired off three straight games, saving two set points, to erase the early deficit and then take the set to a tiebreak. In the end, though, it would be Djokovic who seized the momentum in the tiebreak filled with spectacular points, storming to a 6-1 win.

In the second set, it would be Wawrinka that jumped out to a 4-1 lead, and Djokovic who fought his way back to even the score. With Djokovic serving to stay in the set 4-5, the Serb hit three unforced errors that gave Wawrinka the set.

Wawrinka saved a critical break point in the first game of the third set and solidified his hold with an ace. Then, in the next game, Wawrinka set up break point with a forehand passing shot down the line and a missed volley try from Djokovic gave him an early 2-0 advantage. Just like he did in the previous set, Wawrinka held strong and broke Djokovic’s serve to move within one set of his third major title.

Then, Djokovic, who had spent the match trying to wear down Wawrinka, began to show signs of cramping and struggled to move around the court in the fourth set. Djokovic called for two medical timeout to tape his toes, but the stoppages did little to stop Wawrinka from capturing his first US Open title.

The world No. 3 is now 3-0 in major finals. His previous two wins came over Djokovic at the 2015 French Open and Rafael Nadal at the 2014 Australian Open.