ST. VINCENT-TRAGEDY – At least seven dead as vehicle plunges into the sea 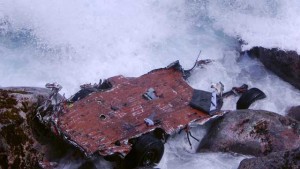 At least seven people, mainly students, died after a minibus plunged into the sea in Rockguter, an area between Owia and Fancy on the northeastern tip of St. Vincent early Monday.
Police and government officials say that five bodies have so far been recovered from the sea, and one person died in hospital. Another person died on the way to the medical institution.
Police are still trying to verify how many persons were in the minibus when it plunged into the sea sometime between 7 a.m. and 8 a.m (local time). Initial reports said that as many as 20 people, including 14 students from the North Union and Georgetown Secondary Schools respectively.

One police source has said that officials were told that the minibus, which is licensed to carry 18 passengers, was “full” when it left Fancy, the northernmost community in St. Vincent.
Residents say that minibus was packed with students from the two communities further south in this North Windward constituency.

They said that the conductor was standing, suggesting that the minibus was carrying more people than it was licensed to carry, a common practice in St. Vincent and the Grenadines.
A large crowd has gathered at the scene where two Coast Guard patrol boats have been searching for bodies or survivors.

The efforts are being affected by especially large waves characteristic of the Atlantic side of St. Vincent, where the terrain is an alternation of steep inclines and deep gorges and winding roads.
Among the bodies recovered from the water is that of a female student. Health authorities said the body showed signed of trauma, presumable inflicted as it knocked against the large rocks that line the shore.

It is not yet clear what caused the incident, but police say that villagers were notified by persons who jumped out of the vehicle before impact.
A grief stricken Prime Minister Dr. Ralph Gonsalves, speaking on national radio, said the “entire nation of St. Vincent and the Grenadines…has been touched by this tragedy of national proportion.
“We all grieve and ask God for guidance and strength as well as we lean on one another,” he said, noting that the recovery of bodies from the sea is ongoing.
“Some of the questions you have are not fully answered, that will come in due time, right now it is the task of making sure that everyone is accounted for. We cannot yet give up hope because there are hope we can find additional survivors as inhospitable as the conditions are, we have to hope…and we have to put the pieces back together and to see what we can do to try to ensure that this…tragedy does not happen again,” Gonsalves said.

“It was a terrible accident and I think everyone’s heart is really heavy because of what has taken place,” he added.
In the wake of the tragedy, Prime Minister Gonsalves has announced a postponement of his budget speech that was scheduled to have been delivered to Parliament on Monday.
“As a consequence of this terrible tragedy, I have consulted with the Leader of the Opposition, the Speaker of the House of Assembly and His Excellency the Governor General and we have all agreed that the Parliament session this afternoon…be postponed until tomorrow the same time,” he added.