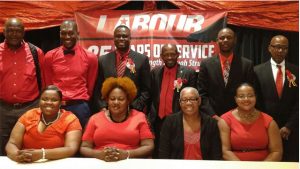 Citing a recent Bill Johnson poll that the St. Kitts and Nevis electorate is ready to dump the ruling Team Unity administration, the National Political Leader of the opposition St. Kitts-Nevis Labour Party (SKNLP), the Right Hon. Dr. Denzil L. Douglas said the party must continue to prepare itself to assume the mantle of leadership to serve all the people.
He told over 700 delegates, business representatives and the diplomatic corps that a new SKNLP Government must prepare itself to halt the social and economic decay that is progressively destroying the local institutions and undermining the livelihood of the people of St. Kitts and Nevis.

“We cannot just bathe in our past successes and become complacent. We have to continue to renew and refresh ourselves so that we would remain relevant to the needs of our people and would confidently take our country to new heights of achievement and development,” said Dr. Douglas, who disclosed that the renewal has started with a critical look at the structures, systems and processes of the SKNLP.

“We are amending our Party’s Constitution to perpetuate the democratic traditions of the organization in a changing society; to empower the membership of the Party to play an even greater role in shaping the policies, positions and activities of the Party; to make our Party even more responsive to the needs and concerns of our society; especially our youths and to ensure that the Party is even better equipped to initiate positive change in our society and advance the social and economic development of our Federation through the slate of candidates it offers to serve our people as Parliamentarians and Cabinet Ministers,” he told delegates.

He said the Party has made provision for an Independent Disciplinary Tribunal to ensure that the highest standard of ethics is maintained in the Party and that nobody is beyond the Constitution and Rules governing the SKNLP.

“We also have made provision to tighten the connection between the Constituency Branches and the National Organization through better supervision, communication, coordination, and collaboration and to strengthen the systems of Financial Management, Accountability and Transparency at both the constituency branch and national levels, Dr. Douglas said.

He said the SKNLP has enshrined in the Party’s Constitution, the processes for the Selection of Candidates for Elections, and give focus and clarity to all processes involving Succession Planning at both the national and constituency levels of the Party.

He said that the question of Term Limits in Government is one that must be decided by the people of St. Kitts and Nevis in a Referendum in which each person votes freely in accordance with his or her conscience, and not necessarily based on Party affiliation.

He said as long as the SKNLP continues to be strong as a Party it will be also be strong in Government and on taking up the reins of Government, it will comprehensively and definitively fix the problems giving rise to crime.

“Indeed, this is such an urgent matter that we remain committed to our offer to sit with the Government, even now, and help to eradicate crime through bipartisan collaboration and an integrated and focused national effort. The Government, of course, would have to commit more resources to the fight against crime. I know that the fight against crime must be multifaceted and must entail various social, economic and educational initiatives, but I am persuaded that perhaps the biggest factor giving rise to the surge in crime is the low detection rate,” he said.

Dr. Douglas, the Leader of the Opposition, is of the view that the criminals feel that they can shoot up the city in broad daylight with little or no chance of detection and conviction.

He said a new St. Kitts-Nevis Labour Party administration will put the twin-island federation back on the path of becoming the first sustainable state, protect its democracy and resubmit new Integrity in Public Life legislation

“Labour in Government will also correct the marked deviation from the path of accelerated inclusive growth and development to which the economy was firmly wedded until 2015. Labour did it in the past. Labour will do it again! The many stalled development projects that lay dormant throughout our Federation will be activated and will help to bring new life to our economy, not necessarily as purely real estate projects where the focus is primarily on the sale of condominiums, but as the means of accommodating vast increases in the number of overnight visitors to our Federation. We will do it again. We are fortunate that we have so many rooms at various stages of construction. It is for us to create increased demand for those rooms by expanded sustainable tourism promotion and by fostering the continued development of the offshore education sector. The current budgetary allocation to tourism is woefully inadequate and would not achieve this objective,” said Dr. Douglas.

He said if the rooms are in high demand and offer good returns to prospective investors, the necessary investments will be attracted to the various sites to complete them and thereby offer the units for rental as hotel rooms, condominiums or other residential units.

“Labour did it already. Labour will do it again. That was always the plan of the Labour Government. We did not expect to be dependent on real estate sales forever as we saw the various projects as the means of enhancing our room capacity to attract more airlines to our Federation, to bring more visitors to our shores, to create more high quality permanent jobs for our people, and to expand the opportunities for existing and new businesses to operate profitably. We did it already and we shall do it again,” he said.
.

The second cruise ship pier as was planned before the Labour Party left office in 2015, were to place the nation on the path to Sustainable Tourism development.

“We will expand the supply of water to ensure that every citizen could enjoy a reliable 24-hour supply all year round. We were committed and we are still committed to bear the first Sustainable Small Island State in the Caribbean and the world. We will deliver, as we had already planned a modern state-of-the-art Basseterre High School to ensure that the disadvantage our children suffer relative to other children in the Caribbean is permanently removed; and we will continue to upgrade and expand our physical infrastructure to cater to the massive increase in economic activity that will result from the creative policies of a Labour Government in office. The vehicle on which we shall move forward is the Vision and energy of Labour to achieve the first Sustainable Small Island State in the World – harnessing Renewable Energy, Abundance of ground water, sustainable Agriculture, Tourism development, Waste Management, protection of the rehabilitation of our degraded physical resources, with the well trained, skilled, financially resourced human capital of St. Kitts and Nevis,” said Dr. Douglas.

He said the SKNLP will at the right time, set out in detail the programme for social and economic transformation that it will pursue when it assumes office.

“We are confident that our country will resume its position at the top of the regional economic growth tables within a short period after a Labour Government is installed. My experience in Government has assured me that the economy will be resuscitated through a creative blend of policies and projects, effective economic management and genuine care and concern for our people. We did it before and we shall do it again,” Dr. Douglas said.