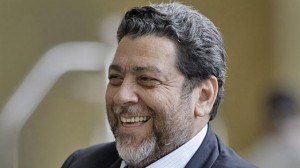 Prime Minister of St. Vincent and the Grenadines (SVG) Dr. Ralph Gonsalves says a sex tape making the rounds between a young female and a much older male is nothing more than a set up, as tension begins to rise in the lead up to that country’s general election on December 9th 2015.

Since its release, speculation has been rife about the identity of the male voice on the tape.

Gonsalves ruling Unity Labour Party (ULP), is seeking another term in office. The New Democratic Party (NDP) headed by Arnhim Eustace, a Former Prime Minister, who lost the last General Election in 2010 by an eight to seven margin in the 15-seat parliament, is the main opposition party.

Part of the tape in question consists of a young female and a much older man in a sexual conversation in which the man reveals having called the girl the previous day while coming from parliament.

But speaking in an interview, Gonsalves alleges that the sex tape was contrived by a man and a woman who left the island the next day after releasing the tape, (Sunday 8th November 2015) aboard a LIAT flight not long after the announcement of the date for election. According to him, they are being holed up in a hotel in St. Kitts and Nevis.

He also informed that the two have links in St. Vincent and the Grenadines.

Gonsalves said the leader of the Opposition said he would introduce Economic Citizenship to St. Vincent and it is no coincidence that that particular company which is operating out of St. Kitts would be hosting the two.

“I give you that information because if you cannot go to the electorate with a program and a plan for the upcoming election, you brought several people here to get traction so this is a plan planned in the highest quarters in this country. You have to add and put one and one together.”