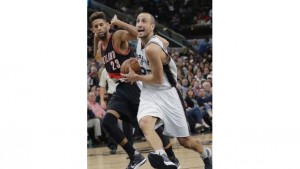 Manu Ginobili put the Spurs on his back in the fourth quarter, scoring 14 points to lead them past Portland.

SAN ANTONIO — Manu Ginobili entered fire-hazard territory late in the second half of the San Antonio Spurs’ 93-80 win over Portland, lighting up the Trail Blazers for all 17 of his points in the final 12 minutes, 53 seconds, including 14 in the fourth quarter.

“They were not falling tonight,” Ginobili said of the team’s first-half shooting. “We were taking good shots. It just sometimes happens. Nobody finished the game feeling good about the start, the way we played. [Portland] played yesterday in Charlotte. They were losing by 20-something, made a great run, and wasted just a lot of energy. They still came here and almost beat us. So it’s like we didn’t play good enough. We’ve really got to step up. Just the way we played is so far away from what we want.”

San Antonio opened the night hitting 7-of-26 from the field in the first quarter, and followed that up by going 7-of-21 in the second quarter. Luckily for the Spurs, the Trail Blazers shot horridly (11-of-36 in the first half) too, while turning over the ball eight times, six as a result of San Antonio steals.

Having missed the team’s last outing due to an adductor strain, Ginobili started out the game missing all three of his first-half attempts. Ginobili finally connected on his first basket with 53.3 seconds left to play in the third quarter off an assist from David West to put the Spurs up 63-58.

“I just think overall our competitiveness tonight was great, and our execution wasn’t,” Spurs coach Gregg Popovich said. “But they kept working at it. That’s the most important thing: Just keep going, keep going. It’s a long game. It’s 48 minutes. Finally, Manu got hot for us.”

The Ginobili inferno started with an 8-foot floater with 3:25 left to play off an assist from Tim Duncan. That bucket kicked off a string of nine consecutive points from Ginobili over a span of 2:15, ending with a 3-pointer to put San Antonio ahead 90-80 with 1:10 remaining.

“He does what Manu does,” Portland coach Terry Stotts said. “He made some good plays. He made his 3’s. He was aggressive going to the basket, got to his strong hand a couple times. He has done that for years.”

Ginobili credited the defense for playing a key role in the Spurs pulling out the win. The Spurs (8-2) are now 6-0 when they hold opponents to fewer than 90 points. The Spurs have limited opponents to an average of 90.6 points per game, which ranks No. 2 in the NBA, while holding them to 42.1 percent shooting, good for fourth in the league.

“That’s the great thing about playing good defense,” Ginobili said. “We kept them [at] 80, and that’s what gave us air. But if we would’ve played like this in another game, offensively, in Portland we would have lost by 20. It’s good our defense was able to hold us.”