Home / Sports / Sources: Some agents believe Knicks ‘would poke around’ on trading for Russell Westbrook

Sources: Some agents believe Knicks ‘would poke around’ on trading for Russell Westbrook 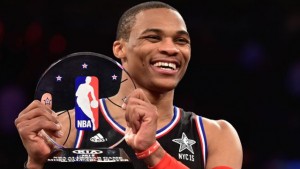 Knicks fans are interested to see what new team president Leon Rose’s first offseason will look like, especially when it comes to the 2020 NBA Draft. But Rose may also want to make a splash with a blockbuster trade to bring a proven player to the Big Apple.

SNY’s Ian Begley has brought up Chris Paul in the past as a veteran point guard the Knicks could definitely consider if the Oklahoma City Thunder want to trade him. But how about a former teammate of his?

Begley is hearing that “some agents who represent top point guard free agents” think the Knicks could be interested in a trade for former MVP PG Russell Westbrook.

The Rockets would, of course, have to make him available. If that were to happen, Westbrook did make it known that New York would be a place he’d like to play when the Thunder began talking to teams about the trade that ultimately landed him in Houston.

Westbrook would certainly fix the Knicks’ point guard situation, and as Begley points out, his drive to be great as well as his work ethic would be perfect for the young players to emulate.

It may seem like a longshot, as James Harden and Westbrook seemed to mesh well with each other in their first season together. Houston might not want to break that up.

But with a new team president in Rose, who is trying to get the Knicks back to where they once were and ended the losing drought, he may be willing to coerce the Rockets into sending a perennial All-Star to New York to lead the franchise.