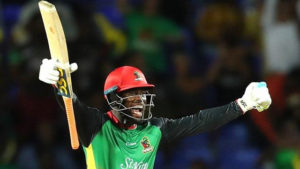 In a stunning upset at the Warner Park Stadium Tuesday night the St Kitts and Nevis Patriots Patriots defeated defeated the Chris Gayle led Jamaica Tallawahs and set a CPL scoring record in the process.

Coming off back to back losses from the season opening matches of the Hero Caribbean Premier League, the Patriots prepared to face the Tallawahs in their first home game of the season.

Patriots fans packed the Warner Park anticipating a challenging match for their team, and hopes of a win dimmed as Jamaica Tallawahs made a mockery of a weak bowling line-up of the home team. Chris Gayle’s 62-ball 116 and Chadwick Walton’s 36-ball 73 powered the visitors to a record CPL total of 241/4. However it didn’t take long for the Jamaica team to know that their total wasn’t enough for a win as Evin Lewis recorded the fastest CPL fifty.

Lewis scored 53 from only 18 balls while his opening partner Devon Thomas struck a 40-ball-71 as they added 86 for the first wicket in only 5.3 overs. Laurie Evans too chipped in with a 20-ball 40 as the hosts raced to 176/2 by end of 13th over. When the required rate was under 10, the pacer Oshane Thomas took three wickets in a single over to bring back Tallawahs into the game. However, Fabian Allen’s unbeaten 37 from only 15 deliveries powered the Patriots to a 4-wicket win with 7 balls to spare.

The Patriots put up 242 over Tallawahs 241 to earn the distinction of having the highest team score in CPL T20 history and the 2nd highest successful run-chase in Twenty20 history!

With a win in the bag for the first of their 5 home fixtures, the Patriots will take on Barbados Tridents at 6pm Wednesday.

Patriots’ Lewis said it was a lot of pressure to chase Tallawahs high score while Captain Carlos Brathwaite said the win has done a lot for the team’s confidence.