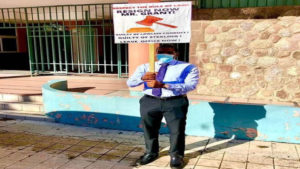 Leader of the Opposition Dr Terrence Drew has ramped up calls for the resignation of Government Minister Lindsay Grant with the staging of a one-man protest outside government headquarters in St. Kitts on Wednesday.

Armed with a placard with the printed words “RESPECT THE RULE OF LAW. RESIGN NOW MR. GRANT! …GUILTY OF LAWLESS CONDUCT! GUILTY OF STEALING! LEAVE OFFICE NOW!”, Dr Drew stood at the entrance of government headquarters garnering attention from passersby and government officials whose offices are located within the building.

The protest comes following Dr Drew’s written statement calling for Grant’s resignation following an altercation that took place on the weekend between the government minister and officers of the St. Kitts Nevis Covid19 Task Force. In videos circulating on social media, Grant’s voice can be heard threatening to ‘wrought up’ police officers as they ask him to excuse himself. The video also shows a blurred image of Grant stepping toward the camera forcing an end to the video. A female police officer has alleged that Grant hit her during the same altercation.

The news of Drew’s protest has been met with positive and negative opinions on social media with one person posting “Yeah, if you want people to follow you, you must show the way! I like this.”

Another said, “It’s a vexing issue for real. Thank you Drew for standing up for our women.”

“One shall lead thousands. It shows that he doesn’t need a crowd to do anything. He believes in principle and does what is needed to see that people do what is right and just,” another posted.

There were some persons who were not impressed.

“Drew should concentrate on getting respect from his party and leave this Grant story alone. Truth be told by the weekend this story will be history but the majority of his party members will still not respect his leadership.”

Another said “So wait…where the supporters? This not a good look Drew. Douglas would never. So no Curtis no shack… all dem other ppl home nar do nutting. Big labour leader n you alone dung dey…”

One supporter replied with “How ain’t a good look??? He standing for what he believes is right… He go with a crowd den oru go say how he breaking covid regulations… WORRY ABOUT GRANT… Drew is and will always be fine!”