SKN Civil Servants To Get Double Salary In December 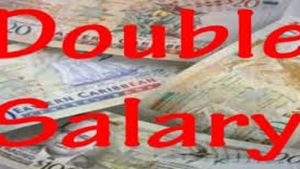 Government Workers are again rejoicing following a recent announcement that for a fourth consecutive year civil servants will be paid a double salary in December.

Prime Minister and Minister of Finance Dr. Timothy Harris revealed this at a meeting with SKN nationals in Miami on Monday.

The double salary bonus is not only paid to civil servants but to government pensioners and persons enlisted on the STEP program.