Home / Sports / Sixers glad to have one, want to ‘get greedy’

Sixers glad to have one, want to ‘get greedy’ 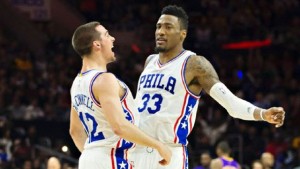 The 76ers celebrated a regular-season victory for the first time since March 25, a span of 252 days.

“Keep it going,” Bryant said, to no one in particular.

At long last, for the first time since March 25, a span of 252 days, the franchise that has become an NBA laughingstock won.

On Tuesday night, in front of a sellout crowd that mostly came to see Kobe’s last hurrah in his hometown, the 76ers snapped a record 28-game losing streak — the longest skid in major U.S. professional sports — and improved to 1-18 on the season after beating the Los Angeles Lakers 103-91.

“They truly stayed together,” said Sixers coach Brett Brown, who improved his career coaching record (all in Philly) to 38-145. “I’m pleased for the city. We didn’t want this streak continuing. I’m pleased for our fans. They deserve it. Obviously, this is a relief on many levels, but we’re gonna get greedy. We want a little bit more, and that’s how we’ll approach [Wednesday] night [in New York against the Knicks].”

Just two teams in league history have ever started 0-18: the 2009-10 New Jersey Nets and these Sixers.

Times have been tough. The losses have mounted. And recently, prized rookie Jahlil Okafor has gotten himself into a lot of trouble.

Heck, going into the game, with Kobe returning and the arena packed with luminaries like Julius “Dr. J” Erving and Clint Richardson on hand for Moses Malone’s jersey retirement announcement, Philly’s won-loss record was an afterthought.

Bryant dazzled early from downtown, and it looked as though the Sixers would be in for another loss and more record-breaking futility. But Bryant began to miss at a high rate after making three of his first four 3-pointers, and Philly took over in the third quarter before fending off the Lakers late.

The Sixers had led in the fourth quarter of their previous five games but couldn’t close the deal. This time, they did — fueled by Jerami Grant’s highlight-reel block of the 37-year-old Bryant. And many of the 20,510 in attendance loved it by the end, chanting “Beat L.A! Beat L.A.!” as the final seconds ticked down.

“We’ve continued to work, knowing this time to get a W would come,” Noel said. “Us as a group, we’ve stayed so close together, and it finally paid off.”

The truth is, “The Process” of rebuilding the franchise, as they like to call it in Philadelphia, is far from over. General manager Sam Hinkie’s radical “tanking” plan to assemble losing teams and accumulate lottery tickets — perfectly within the rules, though hated by some — in hopes of landing a superstar or two continues.

The Sixers have already collected Noel, Okafor, Joel Embiid (injured) and Dario Saric (overseas). And they potentially could have four first-round picks in the 2016 draft, including the Lakers’ top-3 protected selection.

Plus, there’s a lot of cap space available to the Sixers, assuming some high-profile free agent eventually wants to take it.

Still, for all the optimism over what the future could hold, there also is the present to consider, a day-to-day grind for this Brown-led young team full of no-names. As ESPN Stats & Information pointed out recently, Philadelphia’s entire payroll is just below $60 million, but only $18.5 million of that total has seen the court this season — including nine second-rounders or undrafted players making between the rookie minimum and just over $1 million.

Questions have arisen about whether there is enough veteran leadership for the young players, such as the 19-year-old Okafor. And all the losing also has taken a toll, even if the players won’t say so outright.

They couldn’t have a better man leading them through this highly compensated losing project than Brown.

“Nobody’s begging or asking for anything,” Brown said. “We’ve been winning in our last five fourth quarters. We just haven’t figured out a way to close it out. There was a funny moment even in this game that you kinda said, ‘Oh no, not again.’ But this group stays together. This group works. And I’m proud of the work that we put in.

“It’s a true credit to them that they haven’t gone away, they haven’t heard the noise. They stay tight; we’ve built a moat around the program, and it keeps us together. That’s all I know. And to this date, they’ve done that.”

And as a result, on Tuesday night, at least, they could smile. They had won.