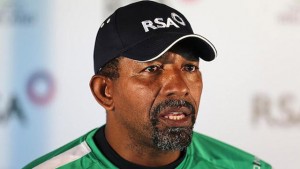 A disciplinary hearing against suspended West Indies head coach Phil Simmons has been pushed back to next week.

PORT-OF-SPAIN, Trinidad (CMC) — A disciplinary hearing against suspended West Indies head coach Phil Summons has been pushed back to next week following a request by his lawyers, according to media reports emanating from Trinidad.

Simmons was due to face a four-member panel on Saturday but his lawyers objected on the grounds that the former West Indies cricketer was not given adequate notice.

The West Indies Cricket Board (WICB) has agreed to the request for the hearing to be deferred to next week but according to media reports no date has yet been set.

Simmons was suspended for alleging external influences in team selection for the tour of Sri Lanka.

Kieron Pollard and Dwayne Bravo were not selected in the ODI team despite requests from Simmons and Captain Jason Holder, along with the support of chairman of selectors Clive Lloyd.

Pollard and Bravo were members of the West Indies team, which abandoned the tour of India in October 2014 due to a pay dispute with its union the West Indies Players Association, WIPA.

Chief Executive Officer (CEO) of the West Indies Cricket Board, Michael Muirhead, said a three or four member committee comprising personnel from within the board, would adjudicate in the disciplinary matter concerning the suspended Simmons.

The committee’s ruling is expected to be ratified by the WICB.

Simmons has since apologized for his outburst describing it as a “moment of madness”.