Shopping System to be Implemented as CoVID19 Measures Continue in St. Kitts & Nevis 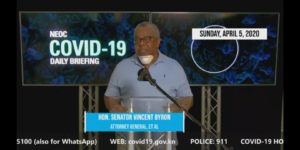 An improved shopping experience will be implemented in a short time.

With persons disobeying social distancing protocols and long lines at supermarkets during periods when shopping is allowed, appeals have been made to the government to initiate a system that allows for as many persons to benefit equally while adhering to the new norms.

Attorney General Hon. Vincent Byron on Sunday (April 5) during the National Emergency Operation Centre briefing said that word of such a system will be announced some time soon as they seek to perfect their plan within the upcoming day.

Such a system is already in place in a number of Caribbean territories including the British Virgin Islands and the Cayman Islands.

Monday morning, an image bearing the national coat of arms and seal circulated on social media. FreedomFM contacted the Health Emergency Operation Centre’s (HEOC) hotline 311 and was told that the image is false as the cabinet discussion continues.