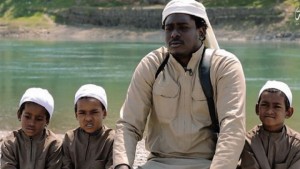 PORT OF SPAIN, Trinidad, Monday November 9, 2015 – Residents of Trinidad and Tobago were shocked and outraged on Friday over a recruitment video produced by the Ar-Raqqah Province of Islamic State (IS/ISIS) featuring what appears to be four fighters from the twin-island state.

One of the men, identified as Abu Zayd al-Muhajir, was surrounded by his three young children, and called on Trinidad Muslims to join in the fight, according to The Express.

Ar-Raqqah is located on the north bank of the Euphrates River in Syria and was the country’s sixth largest city as of the 2004 official census. It was captured by the Islamic State of Iraq and the Levant (ISIL), which has made it its headquarters in Syria.

In the video, Zayd al-Muhajir said the practice of Islam was limited in Trinidad and Tobago. There were no problems in wearing hijab or other Islamic wear, he said, but Muslims were only allowed to practice what they were told.

“The only practice that you can practice is what they tell you is halal [permissible] to practice. The other aspects of Islam are haram [forbidden] for you. You cannot practice your deen 100 percent,” he said.

“It was yearning for me that I knew I had to leave; I had to leave this land. I cannot sit and watch my children grow up in this land in which they cannot practice their Islam 100 percent.”

The 11 minute, 20 second video, entitled, “Those who Believe and Made the Hijra,” was posted on social media.

Another fighter, Abu Khalid, said that Muslims in Trinidad were restricted, and although he lived comfortably there, he felt that he did not belong.

Although raised a Christian, he said he was guided to Islam.

For his part, Trinidadian Abu Abdullah sent a message to his “brothers” in Trinidad and Tobago.

He added that Islamic State was created by Allah and would continue to expand.

Another fighter, Abu Mansour al-Muhajir, said they were fighting against “the allies of Satan.”

“So Allah is inciting us to fight the friends of Satan for they are weak. This is a time when the Prophet, Allah’s peace and blessings be upon him, mentioned that there will come a time when all the nations of the world will gather around to wipe you out. Who? The Muslim,” he said.

Reports of Trinidadians travelling to Syria to fight first emerged last year, when former national security minister Gary Griffith estimated that at least 30 citizens had become terrorist fighters. A United Nations report also named Trinidad and Tobago as a country where fighters were being recruited.

Concerns about recruitment are joined by those relating to repatriation, with a top US general warning that Caribbean countries are unable to track nationals that could return from fighting for ISIS in Syria and elsewhere in the Middle East.

The war in Syria has attracted roughly 100 foreign fighters from the Caribbean who could easily make their way to the United States, said General John Kelly, commander of US Southern Command (USSOUTHCOM), earlier this year.

Kelly said he is concerned that those who are radicalized enough to leave for Syria would return with greater terrorism skills and motivations.

“A hundred certainly doesn’t seem like a lot, it’s not, but the countries they come from have a total inability to deal with it,” he said, naming Jamaica, Trinidad and Tobago, Suriname and Venezuela, in particular.

Kelly’s concern does not necessarily reflect “ISIS at the border” alarmism, rather he is looking at the potential trouble of South American, Central American and Caribbean states in tracking returning fighters for themselves.

The solution to preventing ISIS from coming through the southern hemisphere will require law enforcement and intelligence partnering with every state in the region, he said.