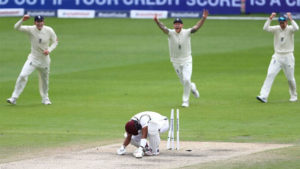 Shai Hope has been tipped for “a tremendous future in Test cricket” despite being dropped from the West Indies Test squad for the tour of New Zealand.

Hope, now aged 26 and a veteran of 34 Tests, has long been viewed as one of the most talented batsmen in the Caribbean. But despite performing well in ODI cricket – he is currently placed at No. 12 in the ICC’s batting rankings in the format and was at No. 4 midway through 2019 – he has endured a grim run of form in Test cricket. He has averaged 19.48 since December 2017 and just 14.45 since February 2019. His career average in Test cricket has slipped to 26.27. As a result, he has been omitted from the touring squad and will instead work on his game in Barbados.

“Sometimes, by continuing to select a player, you do them more harm than good. So, we’ve given him an opportunity to go away and work on his game. The head coach, Phil Simmons, has put a programme in place to help him get back to his best. He’s not being left to his own devices.

“He has an important part to play in the future of West Indies cricket. There’s a tremendous future for him in Test cricket, but he needs to get his batting back to where we know it can be. That’s what this is about: giving him that opportunity to find his mojo again in Test cricket and come back a stronger and better player.”

John Campbell may consider himself fortunate not to have suffered the same fate. Campbell, who has a top score of 55 after nine Tests, actually scored fewer runs than Hope in England but, while Harper admitted there was “a lot of discussion” over his position, he has held his spot.

“There was a lot of debate about this,” Harper said. “And there were a lot of other players considered, including Kieran Powell. But in the end, the panel decided to give him another opportunity to cement his place in the team.”

While Harper admitted the batting, especially the top order, had been a concern for a while, he was hopeful the return of Darren Bravo and Shimron Hetmyer would add some solidity. Both men have earned recalls – Hetmyer is also in the T20I squad – after having opted out of the tour to England on health grounds.

“The return of these guys is very important,” Harper said. “Our batting at the top has been a bit of a problem. It is an area that has been concerning us for a while. We’re hoping that the return of Bravo will add some solidity and leadership at the top of the order. We hope it will help us lay the foundations to build big totals. He’s been making runs consistently in every format.

“We know how talented Hetmyer is and he gives us a lot more depth, quality and ability in the middle order. He’s hungry to get back and anxious to show what a quality player he is, especially in Test cricket. I personally believe he has the ability to be one of best batsmen in the world in Test cricket. We hope he’ll be able to seize the opportunity to show how good he is.”

With quarantine regulations in the Caribbean rendering a training camp difficult to arrange, the squad is expected to depart for New Zealand early and have a camp there. The tour will also see an A side made-up of the reserves, the T20I squad, and those not required by the Test team, play two four-day first-class games during the Test series. Nicholas Pooran, who has only played three first-class games, is one of those expected to feature in these matches. “A lot of consideration was given to [selecting] him [in the Test squad] and we’re still considering,” Harper said.

Meanwhile, Harper insisted that both Chris Gayle, who last played T20I cricket in March 2019, and Sunil Narine, who has recently been reported as having a suspect action, remained under consideration for T20 World Cup selection.

Andre Fletcher, meanwhile, returned to the T20I squad for the first time since 2018, while there is a first call-up in the format for Kyle Mayers, who enjoyed a good CPL campaign. Rahkeem Cornwall retained his place in the Test squad, too, despite an underwhelming performance in England.

“Of course we kept faith in him [Cornwall],” Harper said. “You have to remember, two Tests ago, he has a ten-wicket haul in Test cricket. It was one Test in England. A little bit of inexperience showed there. We expect he can raise his game if called upon again.”

Andre Russell, Lendl Simmons and Evin Lewis opted not to participate in the tour. Health concerns and the demands of life in lockdown are understood to be have been key factors, while Lewis told the selectors he was injured. A statement from CWI said it “fully respects their decision” and that it “will not impact consideration for future selection”.