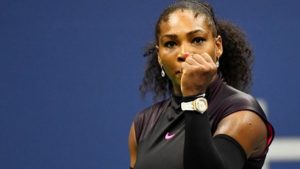 On a night when her best was elusive against a younger, primer challenger who bent and bent some more but would not break, Serena Williams was forced to conjure the determination, grit and imagination she has made appear routine on the court where her legend took flight.

The world No1 was pushed to the limit by the fifth-seeded Simona Halep in a thrilling US Open quarter-final on Wednesday under the lights at Arthur Ashe Stadium, finally outlasting the game Romanian for a 6-2, 4-6, 6-3 win that lifted her into the last four for the ninth straight major.

Halep broke Williams for the first time all tournament in the opener. Then she did it again. And she warded off all 12 break points she faced during a second set where the top seed’s error-strewn play augured disaster. But the 22-times grand slam champion righted herself in the decider and survived her sternest challenge of the season-ending major so far.

“I’m glad I got tested,” said Williams, who pounded 50 winners to offset 43 unforced errors. “The best part of it is I think her level really picked up in the second, but I had some opportunities that I didn’t take. So what I gather from that is I really could have played better in that second set and maybe had an opportunity to win in straights.”

When Williams broke an initially sloppy Halep in her opening service game, it appeared the match would follow a familiar pattern. But the American mixed in a double fault with a pair of unforced errors while serving at 3-2 and was broken for the first time in grand slam play since the fourth round of Wimbledon, a span of 69 service games.

The momentum proved short-lived as Halep failed to consolidate in the following game, double faulting on break point down. That gave Williams all the room that she needed, though she broke Halep once more in the final game to take the opener in 33 minutes.

But Halep, who two years ago reached a career-high ranking of No2 after making the French Open final, was unbowed. She fought back from love-40 down on her first service game of the second set for a hard-won hold, hanging with Williams in lengthy baseline rallies and wowing the crowd with her adroit shotmaking. One game later Halep broke Williams again, getting the best of a 20-stroke exchange from deuce before the world No1 double faulted.

The second climaxed in a dramatic 22-point game with Halep serving to force a decider at 6-5. The Romanian had already saved eight break-point chances in the set but snuffed out four more during the marathon finish, finally taking the set when Williams pushed a backhand past the baseline.

“It’s happened to me in the past before, but like I said on the court, I just stay positive,” Williams said. “I’m glad I had the break points as opposed to not having them. That’s the only thing I can do, and hopefully I can start getting more.”

Williams’ sluggish start to the third was briefly ominous, but she fought back from 15-40 down on her serve to win the opening game. The pair traded holds until the fourth game when Williams rattled off four quick points from love-15 down to earn a break that would prove crucial.

When her ground strokes came up empty Williams flummoxed Halep with variety, mixing in drop shots with an uncommonly high rate of approaches to the net, where she won 26 of 32 points. The clean play that had marked Halep’s fightback began to slip as the match extended past two hours, while Serena’s thudding serve – that saw her crunch 18 aces and win 40 of 52 first-serve points – made the difference.

“I’m OK with the way that I was fighting till the end,” said Halep, who finished with 20 winners against 17 unforced errors. “It’s something normal now for me, so it’s a good thing. She played really well. She is the best player, so her serve was huge today.”

When Halep sent a forehand past the baseline on match point after 2hrs 15min, the six-times US Open champion pumped her fist amid roars from the crowd of 23,771.

“She plays really well on these courts,” Halep said. “She’s home, so I feel that she feels very confident. She did a great job. That’s why she’s No1.”

Williams advances to Thursday’s final against the big-serving Karolina Pliskova, the tour leader in aces who won earlier on Wednesday against the Croatian teenager Ana Konjuh. The No10 seed, who saw off Venus Williams in the fourth round, will attempt to become the fourth player to defeat Venus and Serena in the same major tournament, joining Martina Hingis (2001 Australian Open), Justine Henin (2007 US Open) and Kim Clijsters (2009 US Open).

“We’ll see,” Williams said. “I haven’t played against many big servers recently, but she places her serve really well, I think. She definitely gets some speed on it, but her placement is really, really nice. Hopefully tomorrow I’ll be able to read them and play OK.”