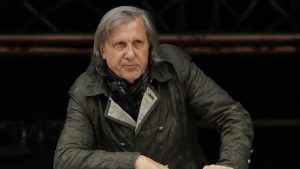 Serena Williams says Ilie Nastase’s recent comments about her unborn child are “racist” and has offered her full support to an International Tennis Federation investigation.

Nastase, a former world number one and Grand Slam champion, was heard speculating whether Williams’ child would be “Chocolate with milk?”

“It disappoints me to know we live in a society where people like Ilie Nastase can make such racist comments towards myself and my unborn child,” Williams said in a statement on social media.

Nastase has been suspended by the International Tennis Federation over the incident that left Johanna Konta in tears on Saturday.

In Konta’s Fed Cup match against Sorana Cirstea, Nastase was sent off after swearing at the umpire and abusing Konta and her captain Anne Keothavong.

He was later banned from the tie and escorted away from the venue in Constanta on the Black Sea coast.

But as play continued on Sunday, Nastase, 70, returned to the site.

The International Tennis Federation (ITF) said the provisional suspension meant Nastase “may not participate in the Fed Cup in any capacity with immediate effect”.

A statement added he “shall be denied access to any ITF event, including the Fed Cup”, pending further investigation into “a breach of the Fed Cup welfare policy”.

Nastase also twice abused a British journalist on Saturday over the reporting of derogatory comments he made about Serena Williams’ unborn child at a Friday news conference.