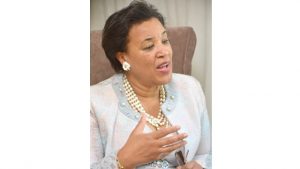 SCOTLAND… An increased empowerment and inclusion of women is not just about fairness, it’s about huge economic opportunity

COMMONWEALTH Secretary General Patricia Scotland says she will be offering to finance ministers of member states, tailored support to allow them to better access the billions that have been pledged for climate change assistance.

The funds are to be made available through the secretariat’s climate finance access hub, as it moves to help cushion vulnerable Commonwealth countries such as those in the region against the devastating impact of storms, and other climate change shocks.

Scotland, in a statement said that the offer will be made at a meeting with finance ministers from across the Commonwealth, set for Washington, DC, United States today.

“Our pioneering counter cyclical financial instruments will give countries a payment holiday if they are hit by a natural disaster. This means much needed breathing space in the aftermath of a storm to focus on recovery and to avoid getting into more debt or defaulting on existing debt,” she explained.

Scotland stressed that it is urgent now for Commonwealth countries’ vulnerability and resilience to climate change to be accounted for in concessional financial arrangements. She argued that despite their obvious vulnerability to violent storms many of these countries cannot benefit under the current income-based measure that international financial institutions use to determine whether a country is given concessional financing.

Scotland indicated, too, that the secretariat had seen it fit to offer special support in light of the devastation being wreaked on these vulnerable economies across the region over many years, the latest being Hurricane Matthew.

“Hurricane seasons have always been a stark reality of Caribbean life; nature’s fury is not restrained by considerations for people, property or economic stability,” she said, noting the increasing frequency and intensity of these system.

“Last year I saw first-hand the terrible cost to lives and the devastation to infrastructure that Dominica experienced when Hurricane Erica wiped out 90 per cent of the country’s GDP — equivalent to US$483 million. In minutes the storm demolished decades of progress,” Scotland said of her native country.

The secretary general said that since news of Matthew broke she has been speaking with Caribbean leaders to reassure them that the Commonwealth is “ready and willing” to support the regional Caribbean Disaster Emergency Management Agency.

“But whilst disaster recovery is critical, we also have to get to the root of the climate-related challenges facing countries right across the Commonwealth. This is why these issues are topping the agenda at the finance ministers meeting. But this meeting is not a talk-shop. I am travelling to Washington with solutions,” she emphasised.

At the same time, she said experts have been examining related issues such as the de-risking methods of international banks and its impact on remittances, and that discussions will also be held with central bank governors on a new report focused on solutions.

“As the Caribbean endures the stress and worry of a hurricane season, we at the Commonwealth will use every opportunity, every platform to galvanise support for our small and vulnerable members,” Scotland stated.