A special audit of the National People’s Cooperative Bank of Jamaica (NPCB) has uncovered the shocking misuse of the money of the more than 200,000 members of the bank, and rampant abuse of position by those in charge at the institution, resulting in over $665 million, or 21 per cent of members’ deposits, unaccounted for. 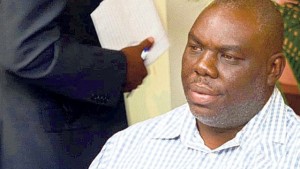 STANBERRY… there are findings of money unaccounted for.

The audit, a copy of which was obtained by the Jamaica Observer, has found that lending from members’ savings has reached the 50 per cent cut-off mark, and that the weaknesses at the bank have exposed the institution to high financial, reputational and information technology risks. The probe was carried out from May 13 to June 19 this year.

The audit first came up for discussion last week at a meeting of the Public Administration and Appropriations Committee (PAAC), where, under pressure from Opposition member Audley Shaw, permanent secretary in the agriculture ministry Donovan Stanberry disclosed that the probe had found that managers at the bank were granting themselves loans and approving loans for board members.

Stanberry also said monies were unaccounted for, but did not confirm Shaw’s charge that those funds totalled more than $600 million.

But now the details of the audit tell a jaw-dropping story of how that amount may have come to slip off the books. Among the many brow-raising details highlighted in the audit is how at least one loan application, from a director at the bank for $50 million, was declined in 2011 by the Development Bank of Jamaica (DBJ), but was approved by the NPCB using members’ deposits.

While that application was being processed, a bridge financing loan of $10 million was granted to the director from members’ savings. “The records disclosed that the loan had interest of $359,614 but was rescheduled and interest capitalised. The account reflected a principal balance of $50.359 million as at May 31, 2015,” the document said.

Another example of weak internal control was the non-collection of the requisite commitment and processing fees on a $30-million loan for 179 days.

The bank, which was set up as the only community bank for rural agricultural and community development in the island, has also been lending money for housing development. The audit showed that three facilities, totalling $180 million, were granted to a client to construct 24 townhouses. “It was noted upon site visit that 12 of the units were completed, of which two have been sold. The current sales price per unit is approximately $12.5 million.” That loan is currently in arrears of approximately $70 million.

The audit also shone the spotlight on a $170,000 loan to a member of the loans committee of the bank for the purpose of “offsetting personal expenses”, on the condition that the loan was to be repaid from the committee member’s travelling claims. And a loan of $4.5 million was granted to another committee member to carry out home improvement works.

Things reached a climax when, in May 2015, the Registrar of Cooperatives and Friendly Societies issued notice of its intention to de-register the NPCB unless it took steps to “remedy”, within three months, complaints that the society was conducting its financial affairs and management unsatisfactorily, which has now “impaired the society’s ability to effectively and efficiently conduct its affairs, ensure the safety and soundness of members’ deposits, and to profitably continue in business” in accordance with its rules and the Industrial and Provident Societies Act and regulations.

The NPCB currently has 36 branches across the island.

Meanwhile, Shaw referred to a letter written to the agriculture minister, Derrick Kellier, on April 23, by the Agricultural Credit Board (ACB), which is the regulator for the NPCB, complaining that the bank had not submitted information related to its accounts and operations as requested. These included its financial report, information on its suspense and reconciliation accounts, which the board said was estimated to be in excess of $670 million as of July 2014, an over $200-million jump over a period of six months.

The ACB further told Kellier that it had issued several directives to the bank regarding delinquent loans, but that none had been adopted. The board said it found that loans made to members of the loans approval committee of the bank were being rescheduled as soon as they became delinquent.

The board also said the bank continued to “create a false impression” as to the true state of its financial position, by including in its financial statements, $1 billion in loans that were written off by the DBJ.

The letter, signed by chairman of the ACB, Hugh Graham, said the regulator would “appreciate” the minister’s support in order to ensure compliance with the ACB Act, and to protect members’ savings.

“The posture of non-compliance cannot be tolerated within the context of an organisation which is the custodian of the life savings of most of its 200,000 members,” Graham wrote.

Yesterday, the committee erupted in cross-shouting when Shaw refused to budge on questions about the audit, while government members Fitz Jackson and Mikhail Phillips insisted that it was inappropriate to discuss the report before it had come to Parliament. At the time of the meeting, the registrar of cooperatives and friendly societies and the chairman of the ACB were locked in a meeting with the agriculture minister to discuss the findings of the audit.