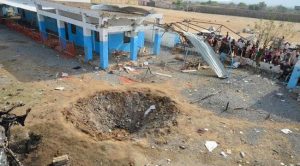 An air strike by the Saudi-led military coalition in Yemen killed nine civilians east of Sanaa on Tuesday, residents said, the third deadly air raid reported to have to hit civilian targets since Saturday.

The attack outside the capital hit the home of a local leader of Yemen’s armed Houthi group while he was out, killing his father and eight members of the family, residents added.

Saudi Arabia’s foes during more than a year of war, the Houthis are Yemen’s dominant political force and are fighting against Saudi-backed loyalists of the country’s exiled government in the Nehm district, where the strike occurred.

A spokesman for the coalition did not immediately respond to a Reuters request for comment.

Saudi Arabia and its mostly Gulf Arab allies intervened in Yemen’s civil war in March 2015 to restore President Abd-Rabu Mansour Hadi to power and fight off the Iran-allied Houthis.

The conflict has killed at over 6,500 people and unleashed a humanitarian crisis in one of the world’s poorest countries. Medecins Sans Frontieres said an air strike on Monday hit one of its hospitals northwestern Hajja province and killed 11 people.

UNICEF said a school was bombed on Saturday in neighboring Saada province, killing ten children mostly between the ages of six and eight. Coalition spokesman General Ahmed al-Asseri said the bombing had targeted a center used by the Houthi militias as a training camp.

U.N. Secretary-General Ban Ki-moon condemned Saturday’s air strike and called for an investigation, which the coalition said it would conduct.