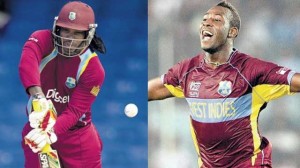 JOHANNESBURG, South Africa (CMC) — Chris Gayle failed and so did the Highveld Lions, as Andre Russell’s Knights reached the final of the Ram Slam Twenty20 League with a comfortable eight-wicket victory yesterday.

Choosing to bat in the play-off semi-final at the New Wanderers Stadium, Lions rattled up 148 for five off 20 overs, with Gayle managing just 15.

In reply, Knights cruised to their target in the 18th over thanks to half-centuries from opener Reeza Hendricks (74 not out) and Rilee Rossouw (58).

Gayle looked dangerous early on, smashing off-spinner Werner Coetsee for a six and a four in the opening over.

However, he was tied down thereafter and finally pulled a short ball from seamer Malusi Siboto to short mid-wicket, to perish in the fourth over.

It was then left to Temba Bavuma, who top-scored with 36, and captain Neil McKenzie with 33, to carry the innings.

Russell played little role in the game, claiming one for 44 and finishing unbeaten on nought when Knights chased.

Gayle recently pulled out of the West Indies squad which arrived here last week for a three-Test series.