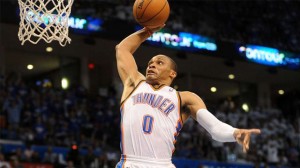 OKLAHOMA CITY — For all the flash, the style, the emotion, the anger and the swaggering bravado that oozes out of his 6-foot-4 frame, Russell Westbrook shrivels up any time you ask him about the ridiculous things he’s accomplishing.

He doesn’t like talking much about himself or the things he has done, making it a point to redirect the conversation toward his teammates or about the big picture of winning the game. It’s what most professional athletes are programmed to do, redistributing praise and letting one’s play speak for itself.

But Westbrook just seems downright uncomfortable any time he gets asked about historical context or some supersized statline. That’s unfortunate, because he’s doing things at a rate that keeps the ESPN Stats & Info Twitter timeline at a steady flow.

For instance: He just put up his 15th triple-double — 21 points, 13 rebounds and 15 assists in the Oklahoma City Thunder’s 111-107 win over the Houston Rockets — that put him in the company of one Michael Jordan for the second most in a season in the last 30 years. Magic Johnson had 17 in 1988-89, and with 11 games left, it almost seems probable Westbrook will jump that number with the way he’s stacking them up (six in his last nine games). That’s pretty crazy, right?

“That’s just a blessing,” he said. “Especially getting mentioned with those guys. Those guys are Hall of Famers. But my job is just to help us win games and try to win a championship.”

That’s the standard Westbrook answer, always coming back to his job description, and what the goal is. Stats are inherently selfish, a tangible display of what a player has done. Westbrook somehow seems to stat-pad in the most selfless way possible, effectively by consuming as much of the game as he possibly can when he’s on the floor. He doesn’t go after the numbers; the numbers just come to him.

“Yeah, that’s good, man,” Kevin Durant said of Westbrook’s 15 triple-doubles. (An aside: Durant said in a decidedly ho-hum kind of way, which says a lot about how routine Westbrook has made these nights). “One thing about Russell is he doesn’t really play for that stuff. That’s not really important to us. For him, of course it’s cool to have that many triple-doubles, but it’s about winning at the end of the day.”

And here’s the thing: That’s what the Thunder do when he gets them. With Tuesday’s effort, Westbrook and the Thunder made it 15-for-15 — 15 triple-doubles, 15 wins. If the Thunder want to reach the level of the Golden State Warriors, the answer to getting there apparently is pretty simple: Westbrook just has to get a triple-double every game — or at least 73 of them, maybe.

It seems as if there’s something to that, though; 15-0 is hard to ignore. Just statistical happenstance, or is something working in those games?

“I’m not sure, man,” Westbrook said. “I think just trying to find the right way to play. All those games are big games for us, because we came out with a win.”

Westbrook probably isn’t the right guy to ask about it. What about coach Billy Donovan?

Said Durant: “I think the thing is, is rebounds. When he rebounds like that we’re a better team. He can pass and he can score with the best of them, but when he rebounds that way it just gives us something extra. I think it’s more so the team what we’re doing around that as well. But all that factors in, and we definitely need it.”

Westbrook has clearly become far more of an active playmaker, constantly seeking out teammates to set up open shots or layups. He has gone from leading the league in scoring a season ago to often resisting the urge to shoot. He did that against the Rockets, sitting in single-digit scoring before uncorking for 14 of his 21 points in the fourth quarter. The narrative with Westbrook once upon a time was that he shot too much, but it was never out of a ball-hogging selfishness. It was more about survival instinct and a lack of overall trust. But with more well-rounded offensive weapons playing around him now — such as Enes Kanter, namely — he has turned into the league’s best creator.

He has entirely bought in — which is the most important part. There were fears about his coachability under a new regime, moving away from Scott Brooks’ more liberal “Let Russ Be Russ” philosophy into Donovan’s slightly more democratic approach. All Westbrook talks about is winning, and as he has matured appears to understand and believe in the process it takes to do that. For example: The Thunder are 19-1 this season when he shoots 15 or fewer times. They’re 30-12 when he records 10 or more assists. Like the triple-doubles to wins and losses, they’re possibly just arbitrary stats that connect some dots — or maybe the combination to unlock the full potential of the Thunder.

To see Westbrook grow into the kind of player who has gone from one of the most polarizing and debated players in the league to one who now has 12 games of 15 or more assists has been a remarkable evolution. To see a player who has put up 15 triple-doubles with still 11 games to go — well, even Westbrook is shocked by that.

“Never, man. Never,” he said when asked if he ever expected that. “I’m just blessed to be able to play the game I love and have an opportunity to play with such great guys. My teammates do a great job of helping me out and I just go out and try and compete at a high level every night.”

What else did you expect him to say?