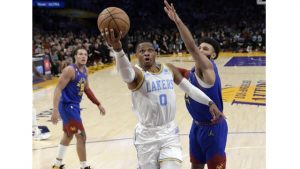 On the first night of the NBA season, it all seemed like such a bad idea.

Russell Westbrook sat at a table just outside the Lakers’ locker room and said that his routine was so disrupted by coming off the bench in the team’s preseason finale that it caused his hamstring to tighten up.

And while it’s probably not all that controversial to think someone who’d done something like start in the NBA had developed a pretty strict routine for more than 1,000 NBA games, the implication around the league was that Westbrook wasn’t going to make coach Darvin Ham’s life any easier by embracing that option.

Instead, he’s given it a bearhug.

Sunday, in his second regular-season game as the Lakers’ sixth man, Westbrook looked more like himself than he had at any other time in his Lakers tenure.

Westbrook got a key offensive rebound and split the Denver defense, switching hands and scoring to ice a 121-110 win, the first of Ham’s coaching career.

“We needed to prove something to ourselves,” Ham said.

After a sleepy Sunday night start, it was Westbrook who injected life into the Lakers in the first half. And in the second half, it was Westbrook orchestrating the best run of the Lakers’ season, looking toward the sounds and basking in the cheers while asking for more.

“Whatever is needed for me to help the team win, that’s what I’ll do,” Westbrook said.

The Lakers scored 17 straight points, the team’s shooting finally catching up with its defending. Matt Ryan, who earned the Lakers’ 15th spot in training camp, hit a pair of threes, and Lonnie Walker IV, who has struggled badly all season offensively, caught fire, all with Westbrook pushing the pace.

He finished with 18 points, eight rebounds and eight assists — the Lakers’ bench outscoring Denver’s reserves by 19.

LeBron James scored 26 and Davis added 23 and 15 rebounds after missing one game with his ongoing lower-back issues. Later Sunday, Davis appeared to re-aggravate the injury, but he remained in the game.

After the final buzzer, James and Davis met under the basket to quickly celebrate the win.

Davis acknowledged he’s still dealing with quite a bit of pain — but said that he wants to push through.

For the Lakers, it was nice to finally live in the moment — though as a bit of insurance, the team took a look at a piece of its rich past.

Before the game, James Worthy hosted a ceremony to retire George Mikan’s jersey alongside those of the Hall of Famers who played for the Lakers in L.A. The team also is putting up banners for the five championships the franchise won before moving to California.

Over 439 games for the Minneapolis Lakers, Mikan averaged 23.1 points and 13.4 rebounds, leaving the NBA as its first giant star and with a namesake drill.

Here’s how it works: The player stands and shoots a right-handed layup, catching the ball as it comes through the net and sliding over to the left side to do the same with opposite hand.

It’s Basketball 101 and with George Mikan getting his No. 99 retired Sunday, it was a natural topic of conversation before the game.

Watching the first half Sunday, it felt like the Mikan Drill just might come back again at the next Lakers practice.

But for the first time this season, the team’s outside shooting lifted the Lakers. They hit 13 of 30 from deep, with five players making multiple threes.

A lot went right — a reminder that the margins for the team are still a little slim, but as the Lakers got ready to seal their first win of the season, Westbrook got fouled and went to the line to cheers.

“One thing I never will let happen is people outside of my family, [the] people that support me, take my joy,” he said. “Always have fun and embrace this game, and embrace the gift I’ve been given to be able to go out and compete. And yes, winning makes you feel better about yourself. But when you’re losing, it’s not as much fun. Tonight was a night where we were able to have a chance.”

As his name was announced, the crowd roared — a moment the Lakers and Westbrook needed.

“The way you’re playing, the way you’re handling is tremendous,” Davis said he told Westbrook. “…That’s truly a guy willing to do whatever the team asks.”