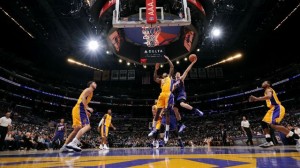 PHOENIX — The Los Angeles Lakers stopped their desert drought with one satisfying performance.

D’Angelo Russell scored 28 points, including six 3-pointers, and the Lakers earned their first win in Phoenix in six years with a 122-110 victory over the Suns on Thursday night.

It was Los Angeles’ first win in Phoenix since Jan. 5, 2011. The Lakers had lost 11 straight road games against the Suns, including a 137-101 laugher in their previous game in Phoenix on Feb. 15, the most one-sided Suns win in the series’ history.

“They whupped us pretty bad before the All-Star break,” Clarkson said, “so we wanted to get this win and we came out and competed. We came together, moved the ball.”

The Lakers took the lead to start the second half and were up by as many as 21 Thursday night. A late Phoenix run made it a seven-point game before Los Angeles scored the final five points.

“I think the Lakers felt like they had something to prove after the last game we played,” the Suns’ Devin Booker said. “They came out and showed that. We didn’t have any fight tonight.”

Los Angeles outscored Phoenix 21-8 to start the second half. It opened an 82-71 lead on Ingram’s dunk off a pass from Russell with 4:10 left in the third.

“There was definitely a focus at shoot-around today,” Lakers coach Luke Walton said. “It was pretty obvious and we talked about it as a group, that they looked locked in. I was expecting the guys to come out and give the effort that they did, honestly.”

Phoenix won the first three games of a season-long five-game homestand, but lost the last two.

“It’s really disappointing,” Booker said. “We’ve beaten top teams, competed with thee top teams in the league. Every team’s talented, but they (the Lakers) are one of the losing teams like us and we should have just come out here and competed hard.”

Phoenix coach Earl Watson said the Lakers “did a good job of just being the toughest team on the court from beginning to end.”

Lakers: The game featured the NBA’s two youngest coaches — Watson (37) and Walton (36). … Randle finished with 13 points. He was coming off his third triple double of the season. … The eight-game losing streak had matched the Lakers’ longest of the season.

Suns: The NBA fined Jared Dudley $35,000 for head-butting Washington’s Jason Smith on Tuesday night. … Alan Williams had 16 points and 10 rebounds for his fifth straight double-double off the bench.

Lakers: Return home to face Philadelphia on Sunday night, a matchup of two teams in the bottom four in the NBA.

Suns: Visit Dallas on Saturday night before returning for three more at home.

Check out the team sites for the Los Angeles Lakers and the Phoenix Suns for more game coverage.