Home / Sports / Rose says he has no pain in knee, aims to return before season ends

Rose says he has no pain in knee, aims to return before season ends 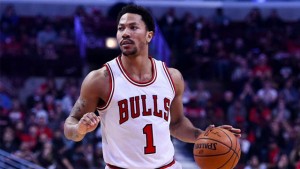 ‘I’m feeling good,’ Derrick Rose said as he hopes to return to the court before the end of the regular season.

Chicago Bulls point guard Derrick Rose said Wednesday he has no pain in his injured knee and believes he will be back on the floor before the end of the regular season.

Rose, who has missed major parts of the past three seasons due to three knee injuries, had a surgical procedure on his right knee Feb. 27. He hopes he can start practicing with contact “this week or next week.”

“That would be the plan, but who knows?” Rose said before the Bulls’ victory over the Toronto Raptors on Wednesday. “Whenever I’m ready to come back, that’s when I’m going to come back.”

Rose tore his ACL in his left knee in 2012 and the meniscus in his right knee in 2013. The Bulls, who have nine regular-season games left this season, said Rose would miss four to six weeks after his latest knee procedure.

“I’m feeling good,” Rose said. “I’m trying to do all the right things, put all the positives in the bag and just try to go with it. It’s something that I’ve been doing for a long time with rehab. It’s a grind — definitely a grind — but I’m getting used to it.”

The Bulls (44-29) currently sit third in the Eastern Conference, three games behind the Cleveland Cavaliers for the second spot.