Home / Sports / Rodman: ‘Very easy’ for LeBron to be successful in today’s NBA

Rodman: ‘Very easy’ for LeBron to be successful in today’s NBA 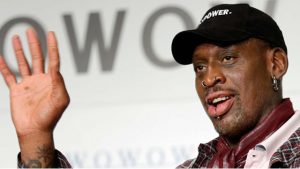 LeBron James’ willingness to take games off for rest shows he’s not as “tough” as Michael Jordan, according to Jordan’s former Chicago Bulls teammate Dennis Rodman.

Rodman took the Cleveland Cavaliers star to task during an interview with CBS Sports that aired Tuesday, saying rest is proof that James is not at the same level as Jordan.

“You know what, LeBron’s doing one thing that I always said that Michael Jordan never did,” Rodman said. “He never rested. He played every game. LeBron has the position to do this now because they need him. The league needs him.

Rodman also said it has been “very easy” for James to succeed in today’s NBA, comparing him to Jordan again by noting that the Bulls star “led the league in scoring 10 years in a row” (excluding his missed seasons to pursue a baseball career) when “that was hard” to do.

“Back then, when he was getting…beat down every game, and then when he played against us [the Pistons], he said — guess what — ‘I gotta go back in the gym,’” Rodman said of Jordan. “And he got tough. He got tough, and he got great. And greater. So that’s it.”

James has never played all 82 games in a season, and he has missed six of the Cavaliers’ 78 games this season. Jordan played the full slate nine times in his career.

James defended the value of resting players when asked last month about an issue that has been debated all season.

James also said he doesn’t view rest as an issue that negatively affects the NBA.

Golden State Warriors coach Steve Kerr weighed in on Rodman’s comments, jabbing the legendary rebounder for his history of on- and off-court issues.

“I saw Dennis Rodman was complaining about it,” Kerr told reporters Wednesday. “I got a kick out of that because Dennis was suspended for 15 games a year, anyway. The guy got plenty of rest. Or [went to] Vegas or Wrestle Mania.

“He just took a night off whenever he wanted, so he can’t complain.”