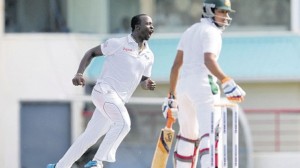 The visitors did well to restrict the West Indies to 380 all out after they had resumed on 246-3, despite Shivnarine Chanderpaul’s unbeaten 84.

But Roach then bowled with pace and good control to derail Bangladesh, who limped to stumps on 104-7, still trailing by 276.

Only Tamim Iqbal, with 48 at the top of the order, offered much resistance. Roach’s new ball partner, Jerome Taylor, supported well with 2-33.

Roach struck with the new ball just before tea when Shamsur Rahman (one) tickled down the leg side and wicket-keeper and skipper Denesh Ramdin flew to his left to grab a one-handed catch.

Tamim and Anamul Haque weathered the early loss in a second-wicket stand of 29 before the tourists collapsed in the final two hours.

Roach claimed Anamul (nine) to an inadvertent outside edge to first slip at 43-2.

Wickets then began to tumble with Roach adding the key scalp of Tamim, who nicked to Ramdin after striking six fours off 75 balls.

Taylor then quickly dismissed Mominul Haque (three) to a fine short leg catch from Jermaine Blackwood as well as Mushfiqur Rahin (four), whose off stump was uprooted by a big off-cutter.

The 26-year-old Roach, who bowled a marathon spell of 12 overs, ended the day well as he prized out Nasir Hossain (one) and Taijul Islam (12) to claim his sixth five-wicket haul in Tests.

Mahmudullah was unbeaten 13 at the close with Shafiul Islam on six not out.

Earlier, Bangladesh enjoyed the first half of the day as they took the hosts’ last seven wickets for 134 runs. Seamers Al-Amin Hossain (2-62), Shafiul Islam (2-79) and Robiul Islam (1-62) all got appreciable swing, while left-arm spinner Taijul Islam (2-89) also chipped in.

West Indies laboured in the first half-hour, adding just five runs in eight overs before Bangladesh struck through Robiul as Darren Bravo edged a drive through to wicket-keeper Mushfiqur Rahim. Bravo, who added just two runs off 27 deliveries, perished for 46 at 251-4.

The visitors dented the West Indies even further with three wickets for one run in the space of five balls.

Blackwood nicked low to first slip, while Ramdin and Roach were snapped up by Mushfiqur off outside edges.

But Chanderpaul remained steadfast and Jerome Taylor played some expansive strokes to shift the balance.

Taylor blasted five fours and two sixes in 40 off 32 balls, dominating an eighth wicket stand of 54 with his senior partner Chanderpaul.

He was dropped on 18 by Mominul off Shafiul and was closing in on a half century when he holed out to long-on off Taijul.

Chanderpaul found another spirited ally in Sulieman Benn, who hit 25 off 19 balls and shared a ninth wicket stand of 52 either side of lunch.

Robiul then ended the innings by plucking out the off stump of last man Shannon Gabriel (4).

S Chanderpaul not out 84

Shafiul Islam not out 6