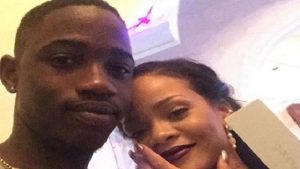 A shooting in Barbados on Boxing Day has cast a dark cloud over Christmas celebrations for superstar Rihanna and her family.

Around 7 p.m. last night, her 21-year-old cousin Tavon Kaiseen Alleyne was shot multiple times by an unknown assailant, prompting her to call for an end to gun violence.

Shortly after the news broke, Rihanna, who spent Christmas in her homeland, mourned the loss on Instagram, sharing photos she took with her cousin whom she saw just the day before and adding the hashtag #endgunviolence.

“Never thought that wAccording to police, Alleyne was walking through a track in the vicinity of his home when he was approached by a man who shot him several times before fleeing the scene.

The gunshot victim was rushed to the Queen Elizabeth Hospital by private vehicle, but he succumbed to his injuries.

Lawmen are on the hunt for Alleyne’s killer and have asked anyone with information to contact either police or Crime Stoppers.

Alleyne’s death brings to 31 the number of people killed in Barbados for 2017.ould be the last time I felt the warmth in your body!!! Love you always man!” she wrote in part.