Home / International / Rihanna accused of plagiarising Betta Have My Money 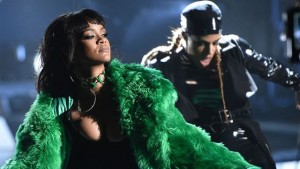 CALIFORNIA, United States, Monday April 6, 2015 – The dust has barely settled on the much-publicised case which saw Pharrell Williams and Robin Thicke fork-out US$7.4 million after being found guilty of copying the late Marvin Gaye’s Got To Give It Up in the creation of their megahit Blurred Lines.

Now it appears it may be Rihanna’s turn.

The Barbadian superstar’s career has been on a high note recently, as she made history by becoming Dior’s first black campaign star, going on to see her animated movie Home turn blockbuster, hauling-in US$54 million in its first weekend.

The sour note started when the Diamonds singer was accused of plagiarizing the music of Just Brittany, a little-known Texas based rapper.

Rihanna, 27, released a new track on March 26 titled B*tch Better Have My Money. But while the song’s title has been used by several other artists, online comments have claimed that aspects of the international hitmaker’s latest single are a tad too similar to Just Brittany’s Betta Have My Money.

Just Brittany’s song failed to attract much attention when it was released on SoundCloud nine months ago. But it has come to dominate social media after Rihanna released her track and performed it live at the iHeart Music Festival.

After claims of intellectual property theft began to surface online, many fans agreed saying a lawsuit “made sense” to them.

Others rubbished the allegations, with one Twitter user writing: “Nah, bit of a reach!”

Still others sat on the fence, with one commenter writing he understood that there were “similarities” but thought Rihanna’s version was “hotter.”

Another writer appeared to swing both ways: “Rihanna didn’t steal no track from that girl just Brittany, and if she did @rihanna song sounds way better,” she tweeted.

The plagiarism claims stem from a similarity in the hooks, which repeat “B*tch betta have my money.”

The lyric is nevertheless one of the most overused phrases in hip hop, and is thought to have originated in a 1988 film by the Wayans brothers (In Living Colour) titled I’m Gonna Git You Sucka.

It has subsequently evolved into a pop culture reference in hip hop, with AMG releasing a track titled B*tch Betta Have My Money in 1992, and artists including Drake and Tyga using the phrase in their music more recently.

The accusations against Rihanna came shortly after the announcement of her part ownership in Jay Z’s new music streaming service Tidal, which offers performers a more favourable royalties deal by charging customers a premium rate to listen to exclusive tracks.